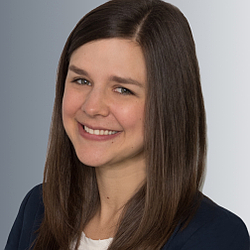 An associate in the Litigation Department and a member of the Supreme Court and Appellate Practice Group, Aimee Brown has served as lead counsel in numerous cases in federal and state court. She has argued before various courts, including the U.S. Court of Appeals for the D.C. Circuit, the U.S. District Courts for the District of Columbia, the Northern District of California and the District of Kansas, as well as the Maryland Court of Special Appeals. Aimee’s work has focused on issues related to constitutional law, administrative law and complex statutory interpretation.

Recently, Aimee was recognized as The American Lawyer “Litigator of the Week” for leading a successful challenge for Spirit Airlines to the way that the Federal Aviation Administration allocated flight authorizations at Newark Liberty International Airport.

Prior to private practice, Aimee worked for the U.S. Department of Justice, first as a trial attorney in the Federal Programs Branch, then as an attorney-adviser in the Office of Legal Counsel. She clerked for Justice Samuel Alito and Justice Anthony Kennedy on the U.S. Supreme Court and Judge Thomas B. Griffith on the U.S. Court of Appeals for the D.C. Circuit. Aimee graduated from the University of Chicago Law School in 2014, where she served as the Executive Articles and Book Review Editor of the University of Chicago Law Review.

This past week the SEC closed its period of public comment on the topic of climate-change disclosures after receiving hundreds of submissions. These comments are the latest in an ongoing discussion among SEC Commissioners and staff,…

Litigation associate Aimee Brown was profiled in the May 25 issue of Bloomberg Law’s Litigation Newsletter.

Paul, Weiss won a significant victory under the Administrative Procedure Act for client Spirit Airlines in an appeal taking aim at the way that the Federal Aviation Administration allocates flight authorizations at Newark Liberty…

Paul, Weiss, with co-counsel from the Maryland Public Defender’s Office, won a significant victory for a pro bono client, when the Maryland Court of Special Appeals reversed his conviction and ordered a new trial.

The U.S. Supreme Court and other federal and state appellate courts are adjusting their practices in response to the COVID-19 pandemic. Courts are canceling arguments, postponing them, or providing for telephonic arguments and are…