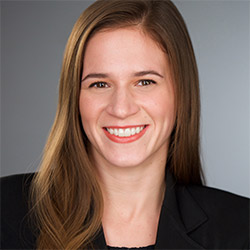 An associate in the Litigation Department, Jennifer R. Deneault focuses her practice on patent litigation matters. Jennifer has represented clients in jury and bench trials in federal district court and before the U.S. International Trade Commission (ITC) and has litigated patents in technical areas ranging from nucleotide sequencing to cathode battery material to sonar technology.

During law school, Jennifer examined fuel cell and battery patent applications at the U.S. Patent and Trademark Office and served as Notes Editor for the AIPLA Quarterly Journal. Before law school, she worked as a chemical engineer for two years. Jennifer received her B.S. in Chemical and Biomolecular Engineering from Cornell University. At Cornell, she served as President of the Society of Women Engineers and received the Undergraduate Student of the Year Award from Diversity Programs in Engineering.

Paul, Weiss and co-counsel the ACLU filed a class action seeking damages on behalf of thousands of traumatized children and parents harmed by the Trump administration’s separation of families at the southern border. » more