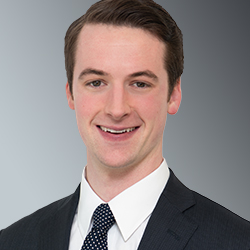 J.D., University of Virginia Law SchoolOrder of the Coif

J.D., University of Virginia Law SchoolOrder of the Coif

Joel Johnson is an associate in the Supreme Court and Appellate Practice Group. Joel has handled a number of appeals in federal and state courts, including several merits cases at the United States Supreme Court. His work has involved issues related to criminal law, constitutional law, administrative law and statutory interpretation. Before private practice, Joel served as a law clerk to the Honorable Robert D. Sack of the Second Circuit, and to the Honorable T.S. Ellis, III, of the U.S. District Court for the Eastern District of Virginia. In law school, he served as Articles Development Editor for the Virginia Law Review and participated in the Supreme Court Litigation Clinic. Joel finished first in his law school class and received the Hyde Award, the highest all-around award given at graduation. Joel has written on topics related to criminal law. His publications include Vagueness Attacks on Searches and Seizures, 107 Va. L. Rev. __ (2021) (forthcoming); Changing the Vocabulary of the Vagueness Doctrine, 101 Va. L. Rev. 2051 (2015) (with Peter W. Low); and his student note, Benefits of Error in Criminal Justice, 102 Va. L. Rev. 237 (2016).

In Seila Law v. Consumer Financial Protection Bureau, the Supreme Court recently held that the structure of the CFPB violates the constitutional separation of powers. One of the most important separation-of-powers cases in recent…

The U.S. Supreme Court and other federal and state appellate courts are adjusting their practices in response to the COVID-19 pandemic. Courts are canceling arguments, postponing them, or providing for telephonic arguments and are…