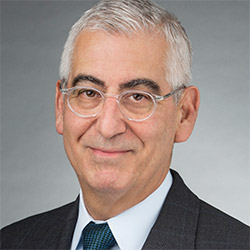 Alan has been ranked by Chambers USA for more than a decade, is recognized in the “Hall of Fame” by The Legal 500 and has received the Lifetime Achievement Award by New York Law Journal. Recognized as a Band 1 practitioner by Chambers Global, Alan is praised as “a statesman of the Bankruptcy Bar whose senior experience shows in the quality of his work and  is known as “one of the most respected veterans of the industry.” Alan was also named in Lawdragon’s “500 Leading US Bankruptcy & Restructuring Lawyers,” he is recognized as a leading lawyer by IFLR1000 and he was chosen by his peers for The Best Lawyers in America in bankruptcy and creditor-rights law. He is one of only five practitioners in the country to be recognized as a “Most Highly Regarded Individual” by Who’s Who Legal for restructuring and insolvency.

Alan’s work has consistently received industry recognition. His work on Gulfport Energy’s chapter 11 cases was recently recognized as the “Corporate Turnaround (Large)” winner for The Turnaround Atlas Awards 2022. Alan’s role as U.S. counsel to EnQuest plc in connection with its $1.8 billion cross-border restructuring was recognized by The American Lawyer’s Global Legal Awards as “Global Finance Deal of the Year: Insolvency and Restructuring (U.K.),” and the previous year, his role as U.S. counsel to the Winding-up Board of Glitnir Bank hf in the former Icelandic bank’s chapter 15 case was recognized as “Global Finance Deal of the Year: Private Restructuring.” Alan’s work on the restructuring of Charter Communications was recognized as “Stand Out” (top tier) by the Financial Times’ “US Innovative Lawyers 2010.” In connection with his representation of the California Public Utilities Commission in the Pacific Gas & Electric Company chapter 11 case, The American Lawyer named Alan one of its Dealmakers of the Year in 2003.

Alan is also a prolific writer and speaker on industry topics. He contributes annually, with Paul, Weiss restructuring partner Elizabeth McColm, a chapter of the International Comparative Legal Guide (ICLG) To Corporate Recovery and Insolvency. Alan co-authors a similar contribution to the annual Restructuring & Insolvency publication by Getting the Deal Through and to Debt Restructuring published by Oxford University Press. He also co-authored, with Paul, Weiss restructuring partner Brian Hermann, the “USA” chapter of the inaugural edition of The Strategic View-Corporate Restructuring, published by the Global Legal Group.

Alan is a Conferee of the National Bankruptcy Conference, a non-profit, non-partisan organization formed in the 1930s to assist Congress in the drafting of major bankruptcy law amendments. He is a Fellow of the American College of Bankruptcy and a member of the International Insolvency Institute. Alan has also served as the Second Circuit Regent of the American College of Bankruptcy and was the Chair of the Committee on Bankruptcy and Corporate Reorganization of the Association of the Bar of the City of New York from 2005 to 2008. He mediates bankruptcy-related disputes and lectures on bankruptcy-related topics for local, national and international organizations.

Alan chairs the Board of Trustees of the Mount Desert Island Biological Laboratory and also serves on the boards of the NYU School of Law Foundation, Bennington College, the Battery Conservancy, New Music USA and Tectonic Theatere Project. He received Catholic Renewal’s “St. Francis Service Award” in 2014 and UJA-Federation of NY’s “Professor Lawrence P. King Award” in 2018.

Alan Kornberg and Claudia Tobler Co-Author U.S. Chapter in Lexology Getting the Deal Through – Restructuring & Insolvency

Alan Kornberg and Claudia Tobler Co-Author U.S. Chapter in Lexology Getting the Deal Through – Restructuring & Insolvency

Restructuring partner Alan Kornberg and counsel Claudia Tobler co-wrote the “United States” chapter of the 2023 edition of Lexology Getting the Deal Through – Restructuring & Insolvency, published by Law Business Research Ltd.

Restructuring Co-Chair Alan Kornberg was recognized as a leader in the restructuring community and advocate for pro bono work at the Her Justice 2022 Annual Photography Auction & Benefit.

Alan Kornberg to Be Honored by UJA Federation of New York

Alan Kornberg to Be Honored by UJA Federation of New York

Paul, Weiss was recognized for its work on the “Global Finance Deal of the Year: Insolvency and Restructuring (U.K.)” at The American Lawyer’s fifth annual Global Legal Awards.