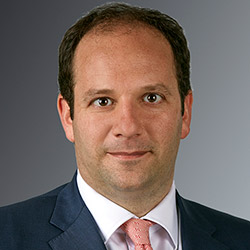 Alvaro Membrillera is a partner in the Corporate Department and Head of the firm’s London office. His practice focuses on M&A and leveraged transactions, particularly in the private equity space. Alvaro has led teams representing private equity firms on a broad range of complex, cross-border matters including public to privates, consortium deals, minority investments, carve outs and disposals. Resident in London since 2002, Alvaro has extensive experience in transactions across a wide range of European jurisdictions for KKR, General Atlantic, BC Partners and other private equity funds. Alvaro has been recognized by The Legal 500 for his work on private equity transactions.

Alvaro’s recent announced transactions include the representation of:

Alvaro, who is fluent in English, Spanish and Portuguese, began his career in Spain and worked for law firms in Brazil and New York prior to moving to London. He holds an LL.M. from New York University School of Law, which he attended as a Fulbright Scholar, and a Licenciatura en Derecho from the Universidad Pompeu Fabra in Barcelona. Alvaro is admitted to practice law in New York and Spain.

Corporate partner Alvaro Membrillera spoke with Reuters about the role private equity is likely to play as the global M&A market moves towards recovery in the year ahead.

Paul, Weiss advised KKR portfolio company Exact, a leading provider of business and accounting software in Europe’s Benelux region, in its acquisition of weclapp from German holding company 3U Holding.

Paul, Weiss is representing Sport Republic in its acquisition of a 70% stake in Turkish football club Göztepe S.K.

Asterion to Partner With Granahan McCourt in National Broadband Ireland

Asterion to Partner With Granahan McCourt in National Broadband Ireland

Corporate partner Alvaro Membrillera and associate Anna Pollak discuss how private equity investors are adjusting to a new period of market volatility in an expert analysis column published in Law360.

Corporate partners Krishna Veeraraghavan and Alvaro Membrillera discuss the challenges to the M&A landscape in the U.K. and Europe brought on by Russia’s invasion of Ukraine and other macro-economic factors with Law360.

Paul, Weiss Shortlisted for “Private Equity Team of the Year” in the 2022 British Legal Awards

Paul, Weiss Shortlisted for “Private Equity Team of the Year” in the 2022 British Legal Awards

Law.com International named Paul, Weiss a “Private Equity Team of the Year” finalist in its 2022 British Legal Awards for our role advising KKR in its acquisition of a majority position in ERM from OMERS and AIMCo.

Corporate partner Alvaro Membrillera has been named one of Europe’s “Fifty Most Influential Lawyers” by Financial News, a news publication focused on business and political leaders in London and across Europe’s financial markets.