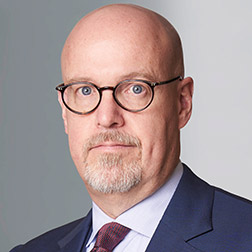 A partner and co-chair of the Antitrust Group, Rick Rule focuses his practice on providing U.S. and international antitrust advice to major corporations in connection with “bet-the-company” matters, particularly high-profile mergers, acquisitions and joint ventures. Formerly head of the Antitrust Division of the U.S. Department of Justice (DOJ), Rick currently represents corporate clients in connection with civil and grand jury investigations by the DOJ, the U.S. Federal Trade Commission (FTC) and the European Commission and in private and governmental litigation both at the trial and appellate levels.

Acknowledged as one of the world’s leading antitrust lawyers, Rick has received numerous industry recognitions throughout his career. Rick is regularly listed in distinguished legal rankings, including as a top-band attorney in the Antitrust and Competition categories by Chambers USA and Chambers Global; as a “Leading Lawyer” in the Antitrust Civil Litigation category by The Legal 500 US; and as a “Top 10 Practitioner” in the Antitrust category by Benchmark Litigation. In 2019, Rick was named “Dealmaker of the Year” by The American Lawyer and a Law 360 “Competition MVP” for his work on behalf of Cigna in its acquisition of Express Scripts. In 2018, Rick and his team were awarded “European Deal of the Year” by The Deal at its inaugural European Awards for their work on behalf of Monsanto in its acquisition by Bayer. In 2012, Rick’s work on behalf of Microsoft in its acquisition of Skype was awarded “Merger Control Matter of the Year – Europe” by Global Competition Review. Rick was also named a top legal innovator by the Financial Times in its annual “U.S. Innovative Lawyers” report for his work on behalf of Microsoft. Additional publications consistently rank Rick as one of the leading antitrust lawyers in the world, including The Best Lawyers in America, The Legal Times, Lawdragon, The Washingtonian, Super Lawyers and multiple Who’s Who Legal publications.

A versatile practitioner, Rick provides U.S. and international antitrust advice to clients facing challenges on the transactional, regulatory and litigation fronts. He regularly represents major corporations and private equity firms in contested multibillion-dollar transactions and advises clients on comprehensive strategies when their interests are implicated in another merger in their industry. Rick also represents clients in civil and criminal litigation and has argued on behalf of his clients in courts throughout the country. While in government, he argued on behalf of the United States in several appeals and before the U.S. Supreme Court in Matsushita Elec. Indus. Co. v. Zenith Radio Corp., 475 U.S. 574 (1986). Rick was also a key member of the team that negotiated on behalf of Microsoft, bringing a conclusion to the historic antitrust lawsuit that the DOJ and a number of states pursued against the company.

Rick represents major global corporations, financial institutions and individuals in connection with criminal grand jury investigations by the DOJ and other enforcement agencies involving allegations of price fixing, market allocation, bid rigging and other criminal conduct on a national or global scale. Based on his former government experience and his ongoing professional interactions with senior government officials, Rick advises clients in effective strategies for protecting their interests throughout the investigation process. In several cases, he has been hired to replace original counsel and helped the company/individual avoid indictment and, in many cases, avoid the need for a plea agreement or amnesty application. Rick has also been retained as an expert witness concerning the government’s criminal antitrust enforcement and its leniency program.

Rick is at the forefront of antitrust law and is uniquely capable of advising clients on the antitrust regulatory environment affecting the way they do business globally. As agencies and rules evolve, he helps clients understand the new legal framework, assess the legal risk and rewards associated with a range of competitive strategies, and work with government bodies to take advantage of, and ensure appropriate compliance with, the regulations governing the clients’ chosen strategy. He has unique experience counseling on antitrust and competition matters for multinational clients operating in China and guiding companies in complying with China’s foreign antitrust laws as they expand into Asia.

Rick began his career as William Baxter’s special assistant in the Antitrust Division of the DOJ, subsequently being appointed as first Deputy Assistant Attorney General and later Principal Deputy Assistant Attorney General. He served as acting head of the Division for part of 1985 and was permanently appointed to the position in late 1986, becoming the youngest person ever to be confirmed by the Senate as Assistant Attorney General in charge of the Antitrust Division. In 1988, in recognition of his exemplary performance, he received the Edmund J. Randolph Award from the DOJ. Following his departure from the DOJ in 1989, Rick has been a partner and head of the antitrust practice at several leading New York and Washington, D.C. law firms.

Rick is a frequent author and lecturer on antitrust and regulatory topics, and he has participated in numerous conferences, workshops and programs on issues of merger enforcement and trade regulation. Rick has also served as a Distinguished Adjunct Professor of Law at American University’s Washington College of Law. He was the inaugural chair of the Corporations, Securities and Antitrust Practice Group of the Federalist Society and served as Chair of the Economics Committee of the American Bar Association’s Antitrust Section. He is an emeritus member of the advisory board of BNA’s Antitrust & Trade Regulation Report, the Washington Legal Foundation and the Landmark Legal Foundation. He is a member of the Board of Directors of the Children’s Law Center and previously served on the Visiting Committee of the University of Chicago Law School.

FTC Will “Routinely” Require Prior Approval Provisions in Merger Orders

FTC Will “Routinely” Require Prior Approval Provisions in Merger Orders

The FTC recently issued a statement on its intended use of prior approval provisions for future transactions in merger orders. We discuss the statement, the circumstances in which the FTC may seek to use these provisions, and some…

SEAKR Engineering to Be Acquired by Raytheon Technologies

SEAKR Engineering to Be Acquired by Raytheon Technologies

The FTC has rescinded its 2020 Vertical Merger Guidelines, which were issued jointly with the DOJ to provide transparency about the agencies’ approach to vertical merger analysis. No new guidelines have been issued. The current FTC…

Four Paul, Weiss partners were selected by Benchmark Litigation for its inaugural list of "Top 10 Practitioners" across 10 areas of practice.