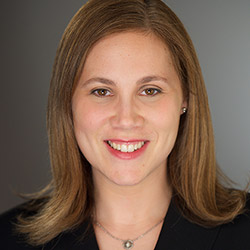 Prior to serving as Pro Bono Director at McCarter & English, she was a Visiting Clinical Professor at Seton Hall University School of Law's Center for Social Justice, where she taught a civil litigation seminar and supervised law students handling live cases in the areas of civil rights and constitutional law. While at Seton Hall, Emily served as lead counsel in impact litigations alleging systemic constitutional violations that included the areas of prisoners' rights, police misconduct and educational equity. Prior to teaching at Seton Hall, Emily served as a Gibbons Fellow at Gibbons, P.C., where she practiced exclusively on pro bono cases in the areas of civil rights, immigrants' rights, prisoners' rights and the death penalty. Emily began her legal career as an Equal Justice Works Fellow (then called the National Association for Public Interest Law), first with the National Women's Law Center and then with the Washington Lawyers' Committee for Civil Rights & Urban Affairs. Her fellowship focused on gender equality in the educational and employment contexts.

Emily has been recognized in the "40 Under 40" list by the New Jersey Law Journal and as one of the "Best 50 Women in Business" by NJ Biz. She received the ACLU of New Jersey's inaugural "Legal Leadership" award in recognition of her work in the area of prisoners' rights. Emily's work in furtherance of marriage equality in New Jersey was recognized by Garden State Equality with the organization's "Pillar of Progress Prize." Emily has also received a New Jersey State Bar Association award recognizing her contribution to an amicus curiae briefing before the New Jersey Supreme Court.

Emily serves on the Board of Trustees of Volunteer Lawyers for Justice, the premiere public interest legal organization in Northern New Jersey. In 2011-12, Emily served as Co-Chair of the New Jersey Bar Association Pro Bono Task Force. While practicing in New Jersey, Emily also served as a long-time member of the Pro Bono Committee of the New Jersey Bar Association, and the Working Group on Immigrant Representation in New Jersey, led by the Honorable Michael A. Chagares (3rd Circuit).

Paul, Weiss, along with co-counsel Bronx Legal Services, obtained a landmark settlement with the New York City Housing Authority that requires NYCHA to comprehensively reform its policies and procedures regarding reasonable…

In June Medical Services v. Russo, the U.S. Supreme Court struck down a Louisiana law that would have severely limited access to abortion in the state.

Paul, Weiss filed an amicus brief in the U.S. Supreme Court on behalf of certain public health and human rights experts in opposition to a stay application that would delay the release of medically vulnerable prisoners who are at high …

As lauded by the New York Times Editorial Board, Paul, Weiss and co-counsel civil and voting rights organizations won a historic voting rights victory in Florida when a judge struck down a state law preventing Floridians with prior…

A CBS News article highlights Paul, Weiss’s critically important new effort as head of a court-established Plaintiffs Steering Committee in the class action on behalf of migrant parents separated from their children upon entry to the…

Paul, Weiss and co-counsel the ACLU filed a class action seeking damages on behalf of thousands of traumatized children and parents harmed by the Trump administration’s separation of families at the southern border. » more

As reported on CBS News and in other news outlets, Paul, Weiss, along with co-counsel at Planned Parenthood and the ACLU, filed suit against the State of Missouri to prevent a near-total abortion ban from taking effect in the state.

Pro bono counsel Emily Goldberg and litigation counsel Steve Herzog were featured in an article focusing on NYU alumni at the firm who are on the front lines of the battles over U.S. immigration policy.

Paul, Weiss is leading a court-established Steering Committee formed by the American Civil Liberties Union (ACLU) to assist the roughly 400 migrant parents who were deported to their home countries without their children in voicing…

Paul, Weiss and co-counsel Texas RioGrande Legal Aid Inc. represent three parents seeking reunification with their children, from whom they were forcibly separated near the U.S.-Mexico border.

As previously reported by Law360, Paul, Weiss and co-counsel Texas RioGrande Legal Aid Inc. represent three parents seeking reunification with their children, from whom they were forcibly separated near the U.S.-Mexico border.

A Paul, Weiss client was released from immigration detention and reunited with his four year-old daughter after 93 days of separation.

Paul, Weiss’s efforts on behalf of three undocumented immigrant parents separated from their children at the border were highlighted in a June 27 article in Law360.

Paul, Weiss and co-counsel the Center for Reproductive Rights brought a legal challenge against a regime of Mississippi laws and regulations that have created unconstitutional barriers to a woman’s right to access safe, legal…

Paul, Weiss and co-counsel ACLU and ACLU of New Jersey filed a habeas petition and class action complaint in the District of New Jersey on behalf of a group of Indonesian Christians seeking to avoid deportation. That same evening,…

Litigation partner Geoffrey Chepiga and pro bono counsel Emily Goldberg will participate in a panel discussion hosted by the New York Lawyers for the Public Interest and the Human Services Council.

The Northwest Immigrant Rights Project (NWIRP) is the only non-profit provider of pro bono immigration assistance in the state of Washington, and often assists pro se clients on a limited representation basis.

Paul, Weiss has been chosen to receive the Sanctuary for Families’ 2020 Above & Beyond Pro Bono Achievement Award for our work as a Founding Member Firm of the nonprofit’s Virtual Courtroom Advocates Project (VCAP), for going…

Paul, Weiss received high marks in The American Lawyer’s 2020 Pro Bono Scorecard, ranking 10th nationally and 5th in terms of the average number of pro bono hours per lawyer in 2019.

Pro bono counsel Emily Goldberg was featured in a recent Q&A in the New Jersey Law Journal as one of five honorees recognized as “Unsung Heroes” in the state.

The ACLU of New Jersey awarded Paul, Weiss a Legal Leadership Award for the firm’s key role in one of the most influential immigrants’ rights cases during the Trump Administration.