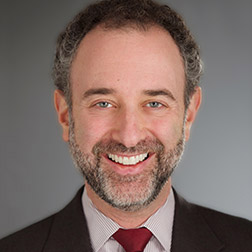 A partner in the Litigation Department and Deputy Chair of our Patent Litigation group, Eric Alan Stone focuses on patent litigation and litigation of commercial disputes, at trial and on appeal.

In the past few years, Eric has focused his patent practice principally in the biotechnology and pharmaceutical areas, including representing innovators under the Biologics Price Competition and Innovation Act of 2009 and the Hatch-Waxman Act. Some of his matters include representing:

Eric is an adjunct professor at the New York University School of Law, where he teaches patent litigation. Eric and his co-Deputy Chair Catherine Nyarady also write a regular column for the New York Law Journal on intellectual property litigation.

Eric is also a general commercial litigator, trying cases and representing clients in state and federal courts across the country, and arbitrations here and overseas. Significant representations include:

Eric is a Trustee of the Lawyers Committee for Civil Rights Under Law. His pro bono representations include:

Intellectual Property Litigation: Patent Venue: ‘Regular and Established Place of Business’ After ‘In re Google’

Intellectual Property Litigation: Patent Venue: ‘Regular and Established Place of Business’ After ‘In re Google’

Paul, Weiss is advising the Kraft Heinz Company in the $3.2 billion sale of its natural and cultured cheese businesses to Groupe Lactalis, a French multinational dairy products corporation.

Paul, Weiss is advising Alexion Pharmaceuticals, Inc. in its acquisition of Portola Pharmaceuticals Inc., a commercial-stage biopharmaceutical company focused on life-threatening blood-related disorders. Under the terms of the…

The Legal Aid Society (LAS) honored Paul, Weiss as a recipient of their 2014 Pro Bono Publico Awards for outstanding service to LAS and its clients. Every year, LAS recognizes the work of volunteer lawyers, law firms,…