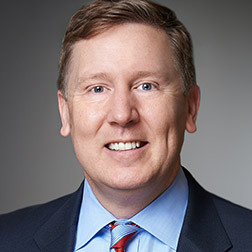 A partner in the Litigation Department, Steve Baughman focuses solely on intellectual property matters and spearheads the Paul, Weiss PTAB practice. For more than 29 years, Steve has worked with leading international companies to resolve their IP and technology-focused disputes in a broad array of litigation, licensing and counseling settings. These include patent and trade secret disputes as well as trademark, copyright and other complex commercial matters. Steve has appeared before trial and appellate courts, the International Trade Commission, domestic and international arbitration tribunals, and the Patent Trial and Appeal Board (PTAB) at the U.S. Patent and Trademark Office, and his patent litigation matters have involved both utility and design patents. IAM Patent 1000 reports that Steve is “brilliant,” “unmatched,” a “post-grant guru,” and “supreme at the PTAB.”

Steve is the leading practitioner nationally handling post-grant matters before the PTAB, created in 2011 as part of the America Invents Act. For example, over the first 4 ½ years of PTAB trials, Steve amassed a 47-0 record in final written decisions on behalf of challengers, invalidating every claim ruled on by the Board, while also turning back key challenges on behalf of patent owners. These wins invalidated or protected patents linked to district court verdicts and market valuations totaling well over $1 billion.

Since filing multiple proceedings in the first minutes of the PTAB’s operation, Steve has been counsel of record in more than 190 covered business method (CBM), inter partes review (IPR), and Post-Grant Review (PGR) proceedings, including more than 60 proceedings argued through a final hearing, as well as numerous matters where his participation is not publicly known — leading IAM Patent 1000 to dub him an “ace up [the] sleeve” and “a consummate all-round advocate and pre-eminent PTAB specialist whose hit rate invalidating and protecting patents - including many of the most valuable assets in the world - is unsurpassed,” with clients praising Steve as “an excellent strategist” and “superb on the technical detail and as up to date on recent developments in the law as it is possible to be.” In addition to his unrivaled record on behalf of patent challengers, Steve has also obtained numerous notable victories on behalf of patent owners, including in decisions rejecting institution or confirming the validity of key litigated claims and patents. Steve also conducts strategic patent reexaminations in connection with patent disputes.

Steve was counsel on 15 of the PTAB’s first 25 CBMs, and to date has been counsel on more CBMs than any other attorney, including the first post-grant trial to reach final decision — recognized by Managing IP as “Milestone Case of the Year.” Steve was named Law360’s first “IP MVP” for post-grant contributions in 2013 and was short-listed for Managing IP North America Award’s “Outstanding IP Litigator (PTAB)” in 2016 and for LMG Life Sciences’ “Post-Grant Proceedings Attorney of the Year” in 2018. His work has also been recognized by The Legal 500 (calling him "the partner to rely on in a technical patent case"), LMG Life Sciences Stars, IAM Global Leaders 2022, Managing Intellectual Property IP Stars (Patent Star), and Who’s Who Legal: Patent. Steve helped to form the PTAB Bar Association in 2016, was one of its Officers and Directors since its creation, and served as the Association’s President from March 2020 to May 2021. He recently completed his service as the Association’s Immediate Past President. Prior to joining Paul, Weiss, Steve chaired the post-grant Patent Office trial practice at a leading firm, where he also opened their Tokyo office.

Examples of significant representations include:

In United States v. Arthrex, the Supreme Court recently found that the structure of the Patent Trial and Appeal Board (PTAB) violates the Appointments Clause of the U.S. Constitution, but preserved the board’s overall structure and…

Litigation partner Steve Baughman was quoted in a recent Law360 article about the first week of telephonic oral arguments at the U.S. Court of Appeals for the Federal Circuit.

Paul, Weiss recently achieved a major substantive win for Tristar Products, Inc. in a patent suit involving expandable and retractable garden hoses, in which Tristar is accused of infringing six patents purportedly invented by the…

Paul, Weiss represented a major biotechnology company in a significant inter partes review (IPR) win at the Patent Trial and Appeal Board (PTAB) that was recently posted in unsealed form by the Board.

Paul, Weiss secured a win in the U.S. Court of Appeals for the Federal Circuit for our client, a leading consumer electronics company, against Rosetta Wireless.

Litigation partner Steve Baughman was quoted in a Law360 article addressing instances where the Federal Circuit either reversed, vacated or issued a mixed ruling on Patent Trial and Appeal Board (PTAB) decisions, revealing key issues…

Litigation partners Nick Groombridge and Steve Baughman and of counsel David Ball were included in IAM Global Leaders 2022, a publication of IAM.

Litigation partner Steve Baughman was named Vice President of the Patent Trial and Appeal Board (PTAB) Bar Association on March 22, following an election held at the organization’s second annual conference in Washington, D.C.