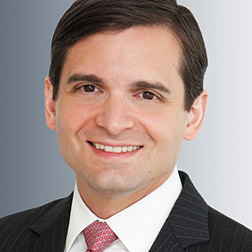 A partner in the Litigation Department, Justin Anderson is a former federal prosecutor and experienced trial and appellate lawyer. He represents clients in a variety of litigation and regulatory matters, including antitrust, securities, and consumer class actions, white collar matters, regulatory enforcement proceedings, and complex business litigation.

Some of Justin’s recent representations include:

Justin previously served as an Assistant U.S. Attorney in the U.S. Attorney’s Office for the Southern District of New York, where he was Deputy Chief of Appeals. During his six years as a federal prosecutor, he led the investigation and prosecution of a wide range of federal crimes, including financial fraud, public corruption, identity theft, cybercrime, and money laundering. Justin took 14 criminal cases to trial, including multiple high-profile public corruption matters and complex white collar cases. For his work on one of those matters, he received the John Marshall Award, the Justice Department’s highest award for trial litigators.

In addition to his successful trial work, Justin is an accomplished appellate advocate. He recently argued appeals for Mastercard in the United States Court of Appeals for the District of Columbia Circuit, and for ExxonMobil in the Supreme Judicial Court of Massachusetts and in the United States Court of Appeals for the Second Circuit. As a federal prosecutor, Justin argued 19 appeals in the Second Circuit and supervised briefing and oral argument in another 80 cases. Addressing questions of first impression, Justin has briefed and argued challenges to the Government’s power to compel the disclosure of emails stored abroad, the extraterritorial reach of securities fraud prosecutions, personal jurisdiction over nonresident corporations, and viewpoint discrimination in the exercise of state power.

In 2019, Justin was named one of the “Litigators of the Week” by The American Lawyer for his work on behalf of ExxonMobil in a landmark $1.6 billion climate-change lawsuit brought by the N.Y. Attorney General’s office.  In addition to writing on a number of litigation and antitrust topics, Justin has published articles in in Law360 and spoken at the Practicing Law Institute’s Expert Witness Program on a panel entitled “Expert Challenges and Use of Experts at Trial.”

Justin was the Editor-in-Chief of the Yale Journal on Regulation. Before law school, he was a vice president at an investment bank.

Paul, Weiss and the National Student Legal Defense Network filed a petition for rulemaking with the Department of Health and Human Services requesting that the agency rectify its imposition of crippling financial penalties against…

Justin Anderson Discusses His Passion for Lawyering In Lawdragon Profile

Justin Anderson Discusses His Passion for Lawyering In Lawdragon Profile

Litigation partner Justin Anderson spoke with Lawdragon about his time as a prosecutor, his litigation practice at Paul, Weiss, and what inspired him to go to law school in a profile published as part of the publication’s “Lawyer…

Litigation partner Justin Anderson will participate in a panel on “Expert Challenges and Use of Experts at Trial,” during the Practising Law Institute’s Expert Witness 2022 program.

Paul, Weiss, in partnership with the National Veterans Legal Services Program (NVLSP), successfully represented a Marine Corps veteran in his application for a military discharge upgrade to full Honorable status. Our client suffered a …

Paul, Weiss secured a victory for an Army veteran in front of the Board of Veterans’ Appeals.

In its recent decision in In re American Express Anti-Steering Rules Antitrust Litigation, No. 20-1766, the Second Circuit, affirming the district court’s order of dismissal, held that a putative class of merchants that did not accept …