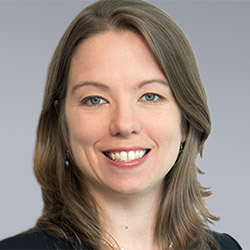 As counsel in the Litigation Department, Megan Raymond focuses on patent infringement matters. Megan has significant experience representing clients in post-grant proceedings before the Patent Trial and Appeal Board (PTAB), and has been involved in over 90 proceedings to date. Megan also has experience litigating in a number of significant patent jurisdictions, including Delaware, New Jersey, Texas, the U.S. Court of Appeals for the Federal Circuit and the International Trade Commission. She regularly manages coordination between PTAB proceedings and district court proceedings.

Megan is ranked in Chambers USA as an Up and Coming practitioner for Intellectual Property: Patent. Chambers describes her having particular expertise in PTAB proceedings and describes her as “a very smart and capable lawyer, who represents clients in a very effective way.” Megan has also been recognized by The Legal 500 for her patent litigation work and was named to the PTAB Bar Association's “Top 50 Women in PTAB Trials” list in 2019.

Megan was the Managing Editor of Virginia Law and Technology at the University of Virginia School of Law. Before law school, Megan was a research fellow at the National Institutes of Health in the U.S. Food and Drug Administration's Laboratory of Immunoregulation (Center for Biologics, Evaluation, and Research), where she co-authored papers on vaccine design and development.

Litigation counsel Megan Raymond will participate in a panel, “Strategic Use of Inter Partes Review and Other Proceedings at the Patent Office to Challenge Validity,” as part of PLI’s Fundamentals of Patent Litigation 2022 program.

Paul, Weiss represented a major biotechnology company in a significant inter partes review (IPR) win at the Patent Trial and Appeal Board (PTAB) that was recently posted in unsealed form by the Board.

Paul, Weiss secured a win in the U.S. Court of Appeals for the Federal Circuit for our client, a leading consumer electronics company, against Rosetta Wireless.

Paul, Weiss secured an appellate victory on behalf of Garmin International Inc., a unit of Garmin Ltd., in a patent infringement dispute with Navico.

Litigation counsel Megan Raymond has been named to the Patent Trial and Appeal Board Bar Association’s inaugural “Top 50 Women in PTAB Trials” list.