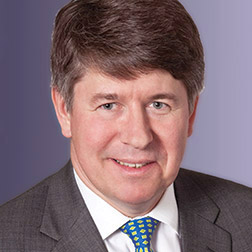 A partner in the Litigation Department at Paul, Weiss, Rifkind, Wharton & Garrison LLP, Nicholas Groombridge focuses exclusively on intellectual property litigation matters. Over the past 30 years, Nick has been extensively involved in all aspects of patent litigation, including trials (both bench and jury). He has been lead counsel in over 150 patent infringement actions in federal district courts and has successfully argued more than 30 cases in the Court of Appeals for the Federal Circuit. Clients describes Nick as “an incredibly good trial attorney who takes the time to master every detail of a case and dominates the courtroom with his knowledge of both the law and the facts.”

Nick has litigated patents in a wide variety of technical areas, including software, semiconductors, pharmaceuticals, biotechnology, wireless networking, consumer electronics, specialty chemicals, automotive parts, financial services and medical devices.  He is a frequent speaker on developments in patent law and has taught courses on patent litigation at both Columbia Law School and NYU School of Law.

Nick has received many professional accolades. He is ranked in Chambers Global and Chambers USA as a Band 1 practitioner for Intellectual Property: Patent. The Legal 500 has described him as “a top-notch patent trial lawyer” and “an excellent strategic adviser,” who has “a unique understanding of the way people think and an ability to get a message across.” He has been named a “National Litigation Star” for Intellectual Property by Benchmark Litigation, one of the Lawdragon “500 Leading Lawyers in America,” “Outstanding IP Litigator” by Managing Intellectual Property and an expert in patent law in the Guide to the World’s Leading Patent Practitioners and The Best Lawyers in America. He is also recognized as an IAM Global Leaders 2022.

Nick is active in several professional societies including the Federal Circuit Bar Association, of which he is a past president.

Paul, Weiss successfully reached a settlement resolving claims for nonpayment of rent brought against a pro bono client by her landlord.

In United States v. Arthrex, the Supreme Court recently found that the structure of the Patent Trial and Appeal Board (PTAB) violates the Appointments Clause of the U.S. Constitution, but preserved the board’s overall structure and…

On June 23, litigation partner Nick Groombridge will speak on a panel, “The Future of Patent Thickets: Balancing Innovation and Competition in the Biologic Ecosystem,” as part of the American Conference Institute’s 12th Biosimilars…

Paul, Weiss garnered a lengthy and powerful dissent from New York Court of Appeals Judge Rowan Wilson, joined by Judge Jenny Rivera, in connection with the firm’s appeal relating to the legality of a search and seizure of our pro bono …

Litigation partner Eric Stone and counsel Jennifer Gordon were recognized by The American Lawyer’s “Litigation Daily” column for winning summary judgment for Genentech in patent litigation brought by Baxalta Inc. in the District of…

Litigation partners Nick Groombridge and Steve Baughman and of counsel David Ball were included in IAM Global Leaders 2022, a publication of IAM.

Litigation partner Nicholas Groombridge was recognized as one of The National Law Journal’s “Winning Litigators” in its 2018 special report.