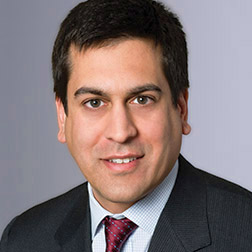 A partner in the Corporate Department, Tarun Stewart is a member of the firm's Mergers and Acquisitions and Private Equity Groups. His practice focuses on cross-border mergers and acquisitions and private equity transactions. Tarun is co-chair of the firm’s International Practice Committee and manages the firm’s visiting lawyers program.

Tarun has worked on a variety of public and private company mergers, asset deals, stock deals, joint ventures, venture capital deals, recapitalizations and buy-out transactions. From 2002 until 2007, Tarun was resident in the Paul, Weiss London office.

His recent representations include:

Tarun has been recognized in Legal 500 as a leading lawyer for private equity buyouts.

On March 4, 2020, the Treasury Department issued proposed regulations implementing the new authority under the Foreign Investment Risk Review Modernization Act of 2018 (“FIRRMA”)[1] for the interagency Committee on Foreign Investment…

Paul, Weiss is representing Safilo Group S.p.A. in its acquisition of Blenders Eyewear.

On September 17, 2019, the Treasury Department released two sets of proposed regulations designed to implement the Foreign Investment Risk Review Modernization Act of 2018 (“FIRRMA”) (which became law on August 13, 2018), along with a …

Paul, Weiss is representing Broadview Holding B.V. in its $840 million acquisition of the Formica Group from Fletcher Building Holdings Limited.

On October 10, 2018, the Treasury Department announced that the interagency Committee on Foreign Investment in the United States (“CFIUS”) had used its new authority under the Foreign Investment Risk Review Modernization Act of 2018…

Paul, Weiss is representing Salini Impregilo S.p.A., an Italian construction company, in the sale of its U.S. Plants & Paving division to Eurovia SAS, a company of the Vinci Group, for a total of $555 million in cash.

As an outgrowth of the Section 301 investigation that was conducted by the Office of the U.S. Trade Representative concerning China’s laws, policies, practices and actions related to technology transfer, intellectual property and…

Paul, Weiss is representing a subcommitte of the board of directors of premier home leasing company Invitation Homes in its stock-for-stock merger-of-equals transaction with Starwood Waypoint Homes.

On July 27, 2017,  the U.S. Treasury Department’s Office of Foreign Assets Control (OFAC) announced a $12 million settlement with two Singapore-based companies over their use of U.S. dollar payments in connection with providing…

Paul, Weiss client The Yokohama Rubber Co., Ltd. announced that it has completed its acquisition of Alliance Tire Group for $1.2 billion in cash.

Paul, Weiss client Houghton Mifflin Harcourt announced that it has entered into an agreement to acquire the Educational Technology and Services division of Scholastic Corporation for $575 million in cash. The deal is…

FedEx Corp. announced that it has signed an agreement to acquire Paul, Weiss client GENCO Distribution System, Inc. GENCO, a privately held company, is one of the largest third-party logistics providers in North…

UBM to Acquire Advanstar for $972 Million

UBM to Acquire Advanstar for $972 Million

As reported in The Wall Street Journal, The New York Times and other media outlets, UBM plc announced that it has entered into a definitive agreement to acquire Paul, Weiss client Advanstar Communications for $972 million in…

Paul, Weiss client Advanstar Global LLC completed its acquisition of ENK International from funds affiliated with Forstmann Little. Advanstar owns and operates a portfolio of trade shows and magazines catering to the fashion,…

As reported in The Wall Street Journal, The New York Times, Bloomberg, Reuters, USA Today and other publications, Houghton Mifflin Harcourt Publishing Company filed for chapter 11 relief on Monday, May 21 with a prepackaged…

Warner Music Group to Sell to Access Industries for $3.3 Billion

Warner Music Group to Sell to Access Industries for $3.3 Billion

As reported in the AmLaw Daily, DealBook and Financial Times, Paul, Weiss advised Warner Music Group Corp. in its sale to Access Industries for $3.3 billion, or $8.25 per share. Warner Music is one of the "big four" recorded…

The Asian Lawyer honored Paul, Weiss with an Emerging Markets Award in the "M&A Deal of the Year: Other Sectors" category for our role in Yokohama's $1.2 billion acquisition of Alliance Tire Group.