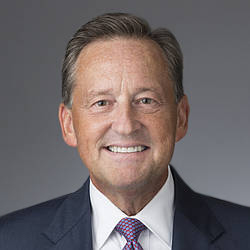 Mr. Bouchard previously served as Chancellor of the Delaware Court of Chancery, presiding over some of the highest-profile disputes involving many of the nation’s largest companies. Prior to his appointment to the bench, Mr. Bouchard spent 28 years in private practice in Delaware, including as the founder and managing partner of a corporate and commercial litigation boutique handling plaintiff- and defense-side work.

Today, Mr. Bouchard advises companies and their boards of directors on a full range of issues concerning fiduciary duties and other Delaware law aspects of corporate management. He also has significant experience representing special committees and investigative committees in connection with a variety of disputes arising out of significant transactions, including shareholder class and derivative actions.

Mr. Bouchard joined Paul, Weiss in 2021 from the Delaware Court of Chancery, where he served as chief judge since 2014, earning renown as a distinguished and effective jurist. Many of his judicial decisions have had a profound impact on business law, including In re: Trulia Inc. Stockholder Litigation (2016), which set tougher standards for disclosure-only stockholder settlements; In re: KKR Financial Holdings LLC Shareholder Litigation (2014), which endorsed stockholder approval as a cleansing mechanism for non-controller acquisitions; In re: HomeFed Corp. Stockholder Litigation (2020), which clarified the terms under which a deal involving controlling investors can qualify for business judgment deference; and FdG Logistics LLC v. A&R Logistics Holdings Inc. et al. (2016), which built on the law surrounding disputes over anti-reliance clauses, among others. Judge Bouchard also oversaw an expansion of the Court of Chancery from five constitutional judicial officers to seven, enabling the court to handle a fast-growing caseload, as well as the court’s successful pivot to all-remote proceedings during the pandemic.

Prior to his appointment to the bench, Mr. Bouchard spent almost three decades in private practice, including seventeen years as the managing partner of a corporate and commercial litigation boutique he founded alongside former Vice Chancellor and current Paul, Weiss of counsel Stephen P. Lamb, handling corporate law litigation, partnership and alternate entity disputes, and commercial litigation on behalf of both plaintiffs and defendants. Among his many achievements, he represented the Walt Disney Company in one of the court’s most
well-known cases, a shareholder lawsuit in which the company successfully defended itself against claims by investors challenging a $140 million severance package paid to Michael Ovitz in 1997.

A Fellow with both the prestigious American College of Trial Lawyers and the American College of Governance Counsel, Mr. Bouchard regularly speaks on issues concerning Delaware law, including corporate governance, mergers and acquisitions, and ethics, among others.

Mr. Bouchard currently serves as chair of the Advisory Board for the John L. Weinberg Center for Corporate Governance at the University of Delaware and on the Board of Trustees of Salesianum School. He previously served on the Delaware Board of Pardons, and as chairman of the Judicial Nominating Commission, chairman of the Delaware State Human Relations Commission, vice chair of the Board of Directors of the Delaware Health Information Network, vice chair of the Board of Trustees of St. Francis Hospital and as a member of numerous other boards and commissions, including the Criminal Justice Council, Sentencing and Accountability Commission, Governor’s Council on Equal Employment Opportunity, and Delaware Board of Bar Examiners. He is a member of The American Law Institute.

Paul, Weiss represented the board of directors of McDonald’s Corporation in its successful proxy fight with activist investor Carl Icahn.

In this issue of the Paul, Weiss Delaware M&A Quarterly, we discuss several decisions of significance to the M&A practice issued during the first quarter of 2022.

In this issue of the Paul, Weiss Delaware M&A Quarterly, we discuss several decisions of significance to the M&A practice issued during the fourth quarter of 2021.

Andre Bouchard Profiled in The Deal

Andre Bouchard Profiled in The Deal

Litigation partner Andre Bouchard was featured in The Deal in a wide-ranging, two-part interview.

Fifty-three Paul, Weiss partners and of counsel were named among Lawdragon’s 2022 “500 Leading Litigators in America” list, which recognizes all-star litigators from a range of practice areas.