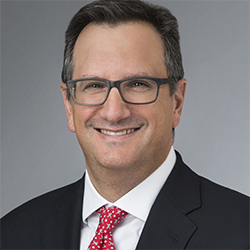 A partner in the Litigation Department and co-chair of the M&A Litigation Practice Group, Andrew G. Gordon has extensive experience litigating and trying cases on behalf of plaintiffs and defendants in complex civil litigation matters. Andrew’s litigation practice is concentrated on M&A litigation, including handling “material adverse change” litigations and shareholder class actions asserting breach of fiduciary duty and disclosure-related claims in the Delaware Court of Chancery, as well as in federal and state courts nationwide. Andrew also handles securities, intellectual property, bankruptcy, employment and other commercial disputes. Clients have described Andrew as an “exceptional litigator, communicator and counselor who delivers practical guidance in navigating complex scenarios,” and as “an incredible cross-examiner” who has “a keen commercial sense and understands clients’ businesses."

Andrew has received numerous industry awards throughout his career and has earned national recognition as a go-to lawyer for “material adverse event” (MAE) disputes and challenging investor disputes in recent years. In 2019, Andrew was named an American Lawyer “Litigator of the Week” twice for both his trial win in Delaware on behalf of Channel Medsystems in Channel’s litigation to enforce a $275 million merger agreement and for his win on summary judgment on behalf of Citco Group less than two weeks before trial in a $200 million public pension fund investor suit in Louisiana. Andrew is also consistently ranked as a leading commercial litigator by various legal directories. He is recognized by Chambers USA in Litigation: General Commercial (NY), listed as a “Leading Lawyer” by The Legal 500 US in M&A Litigation: Defense, recommended by The Legal 500 US in General Commercial Disputes and Intellectual Property: Copyright, and recognized by The Best Lawyers in America in Copyright Law.

Andrew is an experienced trial lawyer, having conducted or participated in numerous trials in federal and state courts, bankruptcy courts and arbitration matters. In recent years, Andrew has developed a substantial practice litigating M&A-related disputes, particularly in the Delaware Court of Chancery where he has achieved several significant and precedent-setting results. In addition, Andrew continues to advise private equity funds and their portfolio companies, financial services providers, and major public companies and their boards in a variety of high-stakes commercial disputes and intellectual property challenges.

Recent experience in M&A-related disputes include:

Andrew is also part of a trial team that successfully represented, pro bono, thousands of individuals with serious mental illnesses in a landmark lawsuit brought against the Governor of the State of New York and other New York officials.

Andrew served as associate editor of the Fordham Law Review and was elected to the Order of the Coif.

Paul, Weiss, acting as M&A and Funds counsel, advised Clearlake Capital Group, L.P. in its acquisition of Chelsea Football Club in a consortium co-led with Todd Boehly, Chairman and CEO of Eldridge.

Litigation partners Andrew Gordon and Jaren Janghorbani were named “Litigators of the Week” runners-up by The American Lawyer for their trial win for Symbiont.io Inc. in its lawsuit against Ipreo Holdings and IHS Markit Ltd.

Litigation partners Andrew Gordon and Jaren Janghorbani were named “Litigators of the Week” by The American Lawyer in recognition of their trial victory for Channel Medsystems in a high-stakes merger litigation in Delaware.

The American Lawyer Names Andrew Gordon “Litigator of the Week”

The American Lawyer Names Andrew Gordon “Litigator of the Week”

Litigation partner Lew Clayton was named “Litigator of the Week” by The American Lawyer following a victory by Lew and litigation partners Andrew Gordon, Susanna Buergel and Moses Silverman in a seminal M&A case on behalf of Paul, …