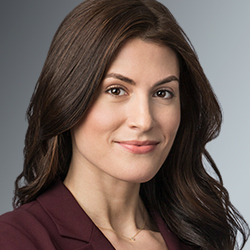 A partner in the Litigation Department and Deputy Chair of the Antitrust Practice Group, Brette Tannenbaum represents clients in a broad range of complex commercial disputes, with particular focus on antitrust and unfair competition litigation. She has significant experience litigating high-stakes cases in state and federal courts at both the trial and appellate levels, as well as before arbitration tribunals.

Brette earned her A.B. from Princeton University, with honors, and her J.D. from Columbia Law School, where she was a James Kent Scholar and notes editor of the Columbia Law Review.

The New York Law Journal named Brette a "Rising Star" in its 2021 New York Legal Awards. Benchmark Litigation recognized Brette on its “40 and Under Hot List” in 2020, 2021, and 2022, most recently calling her an “emerging talent in antitrust litigation.” Brette is a member of the New York State Bar Association’s Antitrust Law Section and the Federal Bar Council First Decades Committee. She also serves on the Board of Trustees of the Randall’s Island Park Alliance.

Litigation partners Alexia Korberg, Jeffrey Recher and Brette Tannenbaum have been recognized by Benchmark Litigation in its 2021 “40 & Under Hot List – Northeast.”