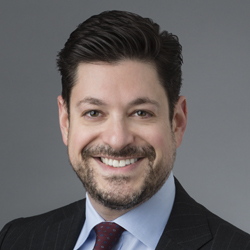 A partner in the Tax Department, Brian Krause advises clients on a broad range of U.S. and international tax matters, with a particular focus on cross-border transactions. He advises on the tax aspects of mergers and acquisitions, joint ventures, post-acquisition integration transactions, internal restructurings and the establishment of private equity fund and hedge fund structures. Brian also provides tax advice in connection with the restructurings of financially distressed corporations and partnerships, both in and out of bankruptcy court, and in matters involving master limited partnerships.

Brian also has experience advising clients in their initial public offerings, including:

Brian is highly ranked in tax by Chambers USA, with sources describing him as “extremely hard-working” and noting that “he has a very good head for all the technical aspects.” In 2020, he was named a “Rising Star” by Law360 and was among Euromoney’s “Rising Stars Americas.”

Brian has written extensively about IRS and tax-related issues for leading legal publications. He is co-chair of the Committee on Bankruptcy and Losses and a member of the Executive Committee of the Tax Section of the New York State Bar Association, a member of the Private Investment Fund Tax Forum and a Fellow of the American Bar Foundation.

Brian has an active pro bono practice; he has been honored several times with the Legal Aid Society’s Pro Bono Publico award for his work with LAS’s Low Income Tax Clinic.

On December 27, the IRS issued initial guidance on the corporate stock repurchase excise tax and the corporate alternative minimum (CAMT) tax, respectively, effective January 1, 2023. We provide an overview of key takeaways from the…

Paul, Weiss advised Insight Partners and its portfolio company Kaseya, a premier provider of unified IT management and security software for managed service providers (MSPs) and small to medium-sized businesses (SMBs), on the…