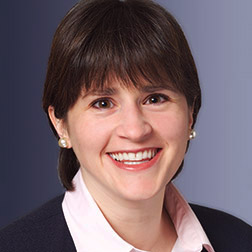 Catherine represented Edwards Lifesciences, the industry leader in artificial heart valves, in multiple litigations and related proceedings, including litigations against Medtronic, Inc. regarding transcatheter heart valves (THV). In 2014, Edwards secured an injunction order against the U.S. launch of Medtronic’s THV products, leading to a settlement in which Medtronic paid to Edwards over $1 billion. This was preceded by two major trial victories: a 2010 jury award of $74 million to Edwards (affirmed on appeal before the U.S. Court of Appeals for the Federal Circuit, certiorari denied) and a 2014 jury award to Edwards of over $393 million.

Catherine is regularly recognized for her work in patent litigation by leading publications such as Chambers USA where sources say she is “technically proficient and has a deep knowledge of patent law” and The Legal 500 where she has been described as having “the big advantage of being a top class litigator combined with a very extensive scientific understanding” and being “very good with tough issues and witnesses.” Catherine has been recognized as a “Client Service All-Star” by BTI Consulting Group and most recently by IAM Patent 1000 as one of The World’s Leading Patent Professionals in 2020.

Cases illustrating Catherine's patent litigation experience include her representation of:

Catherine received her B.S. in Chemical Engineering from the Massachusetts Institute of Technology in 1993 where she was a T.J. Watson Scholar. She received her J.D. in 1996 from Cornell Law School where she was an editor of the Cornell Journal of Law and Public Policy and Chancellor of the Moot Court Board.

Catherine authored a chapter on “Settling Patent Cases” in the leading treatise on the law of settlement agreements and the settlement process, Settlement Agreements in Commercial Disputes: Negotiating, Drafting and Enforcement, published by Wolters Kluwer. Catherine is also co-author of the Bloomberg Law Treatise “Patent Law and Practice” which judges and their law clerks have come to rely on for up-to-date information on patent law and has been cited by courts more than 100 times since its initial publication. Catherine is a member of The American Intellectual Property Law Association and The New York Intellectual Property Law Association.

Intellectual Property Litigation: Cancellation of U.S. Trademarks Based On Misrepresentation of Source

Intellectual Property Litigation: Cancellation of U.S. Trademarks Based On Misrepresentation of Source

Litigation partner Catherine Nyarady’s latest intellectual property litigation column, “Cancellation of US Trademarks Based On Misrepresentation of Source,” appeared in the March 9 issue of the New York Law Journal.

Litigation counsel Jennifer Gordon was recognized by The American Lawyer’s “Litigation Daily” column for winning summary judgment for Genentech in patent litigation brought by Baxalta Inc. in the District of Delaware.

Paul, Weiss, litigation partners Kenneth Gallo and Catherine Nyarady, and of counsel David Ball were recognized as top patent professionals in the 2021 edition of IAM Patent 1000.

Paul, Weiss was included in the 2014 edition of The National Law Journal's "Top 100 Verdicts of the Year" for our involvement in Edwards Lifesciences' patent victory against Medtronic.

Litigation partner Catherine Nyarady was selected as a recipient of a Law360 MVP Award in the area of intellectual property law. Catherine was recognized for her work on several matters, including representing …

The National Law Journal has named Paul, Weiss to its 2013 "Intellectual Property Hot List." The article highlights the firm's IP litigation and transactional practices, noting the growth in our IP group and describing a number of…