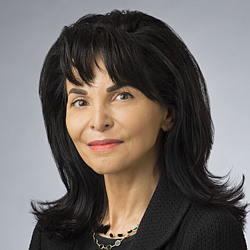 A partner in the Litigation Department, Claudia Hammerman has extensive experience in handling a broad range of litigation and regulatory matters with particular emphasis defending financial institutions and corporations in complex securities and commercial matters as well as representing financial institutions and other clients before the SEC, the Department of Justice and federal and state regulatory authorities.

Claudia has served as litigation counsel on significant securities and commercial disputes for Citigroup, JPMorgan, Wachovia, Bank of New York Mellon and Bank of America. Among her recent significant matters, Claudia:

In 2022, Claudia was named a “Litigation Trailblazer” by The National Law Journal. Claudia has also been selected by her peers for The Best Lawyers in America and Super Lawyers and by Benchmark Litigation as a Litigation Star and one of the Top 250 Women in Litigation.

Claudia has taught several courses in Constitutional Law at Smith College and at Haverford College, and served on the Harvard Law Review. In 1991-92, she clerked for Judge Jon O. Newman, former chief judge of the Second Circuit Court of Appeals.

Paul, Weiss helped a pro bono client win a unanimous Supreme Court victory in a long-running case in which our client sought to reverse an order compelling her to return her child to Italy—where her husband resides—to await custody…

A Paul, Weiss team of more than 50 attorneys and paralegals has completed nearly 200 judicial vetting reports over the past year on behalf of pro bono client American Constitution Society (ACS), a progressive legal organization…

As reported by The New York Times, CNN and other major media outlets, Paul, Weiss and co-counsel the Center for Reproductive Rights have urged the U.S. Supreme Court to uphold Roe v. Wade and reject a Mississippi state law banning…

As reported by the Financial Times, The Wall Street Journal and many other media outlets, Credit Suisse published a 165-page independent investigative report by Paul, Weiss addressing the bank’s relationship with Archegos Capital…

In June Medical Services v. Russo, the U.S. Supreme Court struck down a Louisiana law that would have severely limited access to abortion in the state.

Litigation partner Claudia Hammerman was recognized as a 2022 “Litigation Trailblazer” by The National Law Journal. The publication, which recognizes leading litigators moving the needle in the legal industry, highlighted Claudia’s…

Paul, Weiss has been chosen to receive the Sanctuary for Families’ 2020 Above & Beyond Pro Bono Achievement Award for our work as a Founding Member Firm of the nonprofit’s Virtual Courtroom Advocates Project (VCAP), for going…