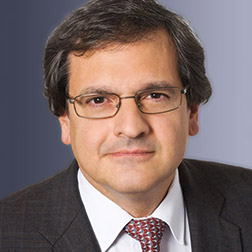 Of counsel in the Corporate Department, Dale Sarro concentrates in the area of international and domestic finance, including acquisition finance and project finance.

Internationally, Dale's representations include projects in the telecommunications, power, manufacturing and mining sectors in Africa, Asia, Europe and Latin America and the Caribbean. He has also been active representing financial institutions and sponsors in connection with the financing of major oil and gas projects.

His domestic representations include bank financings and private placements for major corporate clients. Two of his significant transactions are the representation of North West Redwater as U.S. counsel in connection with the construction by North West Redwater of an approximately $8 billion upgrader to process bitumen supplied by the Province of Alberta and Canadian Natural Resources under long-term supply contacts; and New Dawn Satellite (an affiliate of Intelsat) in connection with a ground-breaking non-recourse project financing for the construction and launch of a telecommunications satellite to service Southern Africa.

Dale has extensive experience working with multilateral lending institutions and export credit agencies, including the Export-Import Bank of the United States, the Inter-American Development Bank and the International Finance Corporation.

Dale has been a member of the Project Finance Committee of the New York City Bar Association.

CLEAResult Acquired by TPG Growth and The Rise Fund

CLEAResult Acquired by TPG Growth and The Rise Fund

Paul, Weiss represented General Atlantic and CLEAResult, the country’s leading provider of energy efficiency solutions for utility companies, in the acquisition of CLEAResult by TPG Growth and The Rise Fund.

Paul, Weiss is representing General Atlantic in its sale of CLEAResult, the country’s leading provider of energy efficiency solutions for utility companies, to TPG Growth and The Rise Fund.

GIS and HireRight to Merge

GIS and HireRight to Merge

Paul, Weiss is representing General Atlantic in its investment in Landmark Health, a group that provides home-based medical care for chronically ill patients.