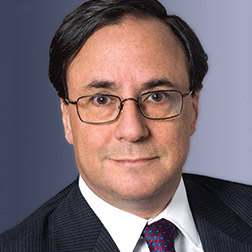 Of counsel in the litigation department, Daniel Leffell has had extensive experience advising clients and handling a diverse array of complex litigation, including commercial contracts, securities and corporate law, antitrust, patents and trademarks, real estate and bankruptcy.

Dan has appeared before trial and appellate courts in numerous state and federal jurisdictions, as well as before arbitration tribunals in the United States and abroad, and has spoken and written on a variety of legal topics, including securities, antitrust and commercial contracts.

Among Dan's successful representations are:

Dan is an active participant in community and charitable causes. He serves as a Trustee of the Jewish Board of Family and Children Services, and as President of the School Board of the Hawthorne Cedar Knolls Union Free School District.

Dan served as editor in chief of the Columbia Law Review and was a Harlan Fiske Stone Scholar.

The Michigan Court of Appeals affirmed a circuit court’s dismissal, on summary judgment, of a lawsuit against Paul, Weiss client Elliott Associates and others related to Thoma Bravo’s 2014 acquisition of Compuware Corporation.

In two recent federal securities fraud actions stemming from the 2008 financial crisis, the Second Circuit has affirmed that statutes of repose

Paul, Weiss client Walter Energy announced the close of the sale of substantially all of its core assets, comprising its Alabama coal assets, to Warrior Met Coal, LLC, an entity owned by the company's first lien creditors.

Paul, Weiss obtained a victory on behalf of the senior management of iStar Inc., a real estate investment trust, when a three-judge panel of the Maryland Court of Special Appeals affirmed the dismissal of a putative derivative…

Paul, Weiss is counsel to Walter Energy and its subsidiaries in their chapter 11 proceedings, filed on July 15 in the Bankruptcy Court for the Northern District of Alabama.