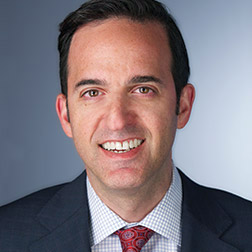 Harris has had a lead role in representing owners and leaders in connection with some of the highest profile sits and developments in New York City and throughout the world, including Hudson Yards, Deutsche Bank Center (formerly Time Warner Center) and 432 Park Avenue in Manhattan, the Tribune Building in Chicago, the Fontainebleau Miami Beach resort, the Venetian Casino Resort in Las Vegas and other hotel casino-hotel-convention center resorts in Macau and Singapore.

In 2020, Harris was again named a “Real Estate MVP” by Law360, a recognition he previously earned in 2019, 2017 and 2015. He has been recognized by Chambers USA, The Legal 500 and Expert Guides as one of the country’s leading real estate lawyers, and he has also been listed as one of Lawdragon’s “500 Leading Dealmakers in America” and one of The Best Lawyers in America for real estate law in New York City since 2011. Harris is also a member of the American College of Real Estate Lawyers. He is involved with numerous charitable organizations including serving as pro bono counsel for The Blue School, an innovative school for young children led by the founders of The Blue Man Group.

Paul, Weiss advised Global Infrastructure Partners (GIP) in its all-cash acquisition, alongside KKR, of CyrusOne Inc. for an enterprise value of approximately $15 billion.

Neustar Acquired by TransUnion for $3.1 Billion

Neustar Acquired by TransUnion for $3.1 Billion

Paul, Weiss advised Neustar in its $3.1 billion sale to TransUnion by a private investment group led by Golden Gate Capital and with minority participation by Singapore-based investment firm GIC.

GIP and KKR to Acquire CyrusOne in $15 Billion Deal

GIP and KKR to Acquire CyrusOne in $15 Billion Deal

Paul, Weiss is advising Global Infrastructure Partners (GIP), alongside KKR, in its acquisition of CyrusOne Inc. for $90.50 per share.

Neustar to Be Acquired by TransUnion for $3.1 Billion

Neustar to Be Acquired by TransUnion for $3.1 Billion

Paul, Weiss is advising Neustar in its $3.1 billion sale to TransUnion by a private investment group led by Golden Gate Capital and with minority participation by Singapore-based investment firm GIC.

Paul, Weiss represented an ad hoc group of noteholders in the prearranged restructuring of Hi-Crush Inc. and 21 of its subsidiaries.