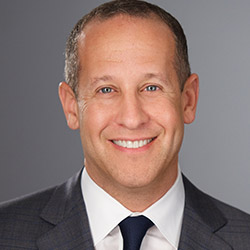 A partner in the Corporate Department, Jeff is the Global Co-Head of the firm’s Mergers and Acquisitions Practice, a member of the Private Equity Group and a member of the firm’s Management Committee. Jeff is a nationally recognized transactional lawyer who focuses on a range of corporate matters. He has extensive experience representing strategic and private equity clients in the full spectrum of public and private merger and acquisition transactions, including negotiated and contested acquisitions and divestitures, minority investments and carve-out transactions. Jeff’s public company experience also includes numerous activist defense matters and special committee assignments.

Jeff’s work has earned him recognition as a leading M&A lawyer in the United States by Chambers and The Legal 500. In 2021, The American Lawyer named Jeff “Dealmaker of The Year” for his role advising Inspire Brands in its acquisition of Dunkin’ Donuts. Jeff was also featured in Variety's 2021 Dealmakers Impact Report as a "Top Negotiator Behind Mega Deals" for his role advising Metro-Goldwyn-Mayer Studios in its sale to Amazon.

Jeff was a member of the George Washington Law Review.

Paul, Weiss is advising American Finance Trust, Inc., a publicly traded REIT managed by AR Global, in the purchase of 81 multi-tenant properties throughout the United States from certain subsidiaries of CIM Group for approximately…

Sponsor-related M&A deals rebounded in November after a relatively slow October. Total deal value increased by 181% in the U.S. and by 159% globally, even as the number of sponsor-related transactions decreased for the third…

Paul, Weiss is advising SVF Investment Corp. 3, a special purpose acquisition company (SPAC) sponsored by an affiliate of SoftBank Investment Advisers, in its merger with Symbotic LLC, an A.I.-enabled technology platform for the…

Paul, Weiss is advising an affiliate of Atlanta-based private equity firm Roark Capital in its acquisition of Mathnasium, a leading franchisor and operator of math learning centers with over 1,000 locations across 46 states and 12…

U.S. and global M&A activity decreased across almost all measures in October as compared to September. The number of U.S. deals decreased by 47% and total U.S. deal value was down by 27%.  Globally, deal count declined by 30%, and …

Independence Holding Company to Be Acquired by Geneve

Independence Holding Company to Be Acquired by Geneve

Paul, Weiss is advising the special committee of the board of directors of Independence Holding Company in the all-cash take-private acquisition of Independence by Geneve Holdings, Inc.

Corporate partners Jeff Marell and Laura Turano were named “2021 Dealmakers of the Year” by The American Lawyer.