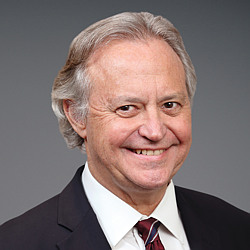 Jack Lange served for 26 years as a partner in the Firm’s Hong Kong office and currently acts as a senior advisor in his capacity as Of Counsel.

Jack’s practice has been concentrated principally on mergers and acquisitions. He is highly experienced in the representation of private equity funds and other financial investors in connection with their investment, M&A and financing activities in Asia. He has represented major private equity funds, as well as leading strategic investors in the technology, communications and media fields, in connection with complex and highly structured acquisitions, investments and fund raisings throughout Asia.

Jack and the Paul, Weiss Asian private equity practice have been consistently recognized as market leaders. Chambers Asia Pacific 2021 ranks Jack as the sole "Star Individual" for private equity/buyouts & venture capital investment in China among international firms, with one source referring to him as “the godfather of private equity” in the region. Asia Pacific Legal 500 includes Jack in its Hall of Fame for private equity work in Hong Kong. IFLR1000 2021 recognizes him as one of a small group of “Market Leaders” in Hong Kong for mergers & acquisitions and private equity, and IFLR included him in its survey of “Asia Best Lawyers”. Jack was named by Private Equity International to its first “Legal Power 30”, a list of 30 private equity lawyers globally identified by the industry and by their own peers as “the best of the best.”

Jack received the Chambers Asia Pacific 2018 Lifetime Achievement Award in recognition of his contribution and significant impact to the Asian legal arena. The award citation refers to Jack as “one of Hong Kong’s most highly reputed corporate partners,” and as having worked “at the forefront of Asian private equity deals for over two decades.”

Corporate partner Jack Lange was recognized in The Legal 500 Asia Pacific Hall of Fame for his achievements in private equity work in Hong Kong.

The Securities and Exchange Commission recently addressed financial reporting considerations and potential SEC relief in light of the effects of the novel coronavirus. These effects may be important to SEC-reporting companies that…

Corporate partner Jack Lange was recognized in The Legal 500 Asia Pacific Hall of Fame for their excellent achievement in private equity work in Hong Kong.

Corporate partner Jack Lange has been elected as the Chairman of the American Chamber of Commerce in Hong Kong (AmCham) for 2018.

Paul, Weiss has been recognized with Asia Women in Business Law Awards by the Euromoney Legal Media Group.