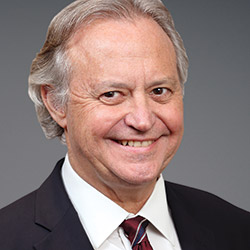 Jack Lange is a partner in the Corporate Department and is based in the firm's office in Hong Kong.

Jack's practice is concentrated principally on mergers and acquisitions.  He is highly experienced in the representation of private equity funds and other financial investors in connection with their activities in Asia, including investment activities and portfolio company financing and acquisition activities. Jack has represented major private equity funds, as well as leading strategic investors in the technology, communications and media fields, in connection with complex and highly structured acquisitions, investments and fund raisings throughout Asia.  He has advised numerous transactions for clients including KKR, Morgan Stanley Private Equity, DCP Capital, Hillhouse Capital, FountainVest Partners, TPG Capital, Apollo Global Management, General Atlantic, CDH, DiDi Chuxing and The Kraft Heinz Company.

Jack and the Paul, Weiss Asian private equity practice have been consistently recognized as market leaders. Chambers Asia Pacific 2020 ranks Jack as the sole "Star Individual" for private equity/buyouts & venture capital investment in China among international firms, with sources describing him as a lawyer “in his own class” and “really well regarded in the industry". Asia Pacific Legal 500 includes Jack in its Hall of Fame for private equity work in Hong Kong, highlighting his recognition as a Leading Individual in this category for nine consecutive years. IFLR1000 2020 recognizes him as one of a small group of “Market Leaders” in Hong Kong for mergers & acquisitions and private equity, and IFLR included him in its listing of “Asia Best Lawyers 2019”. Jack was named by Private Equity International to its first "Legal Power 30", a list of 30 private equity lawyers globally identified by the industry and by their own peers as "the best of the best."

Jack received the Chambers Asia Pacific 2018 Lifetime Achievement Award in recognition of his contribution and significant impact to the Asian legal arena. The award citation refers to Jack as “one of Hong Kong’s most highly reputed corporate partners,” and as having worked “at the forefront of Asian private equity deals for over two decades.”

The Securities and Exchange Commission recently addressed financial reporting considerations and potential SEC relief in light of the effects of the novel coronavirus. These effects may be important to SEC-reporting companies that…

As an outgrowth of the Section 301 investigation that was conducted by the Office of the U.S. Trade Representative concerning China’s laws, policies, practices and actions related to technology transfer, intellectual property and…

Paul, Weiss represented KKR in its investment in and launch of Cue & Co., a one-stop digital marketing company primarily aimed at the Chinese market.

Corporate partner Jack Lange was interviewed by Bloomberg Markets in Hong Kong about the impact of the U.S. Administration on businesses in Asia.

Private companies granting share-based compensation to their employees often will rely on Rule 701 under the Securities Act of 1933 (the “Securities Act”), particularly if the employees being granted options or restricted stock units…

Hong Kong-based partner Jack Lange, in his capacity as Vice Chairman of the American Chamber of Commerce in Hong Kong, hosted an AmCham reception celebrating the 20th anniversary of the establishment of the Hong Kong Special…

Chinese media have recently reported delays in remittance of funds for outbound direct investment transactions, as well as certain other forms of repatriations of funds out of China due to enhanced enforcement of foreign exchange…

Corporate partner Jack Lange will be speaking at the International Bar Association's Asia Pacific Mergers and Acquisitions Conference. Jack will take part in a panel on private M&A and private equity developments.

On January 19, 2015, the PRC Ministry of Commerce released a draft Foreign Investment Law (the "Draft Law") for public comment. The Draft Law proposes to replace the current foreign investment regime with a new system and also…

Corporate partner Jack Lange, with David Norman of David Norman & Co., co-authored the "Hong Kong" chapter of Getting the Deal Through - Mergers & Acquisitions 2014.

Paul, Weiss acted for a consortium of private equity investors led by KKR in its strategic investment in COFCO Meat, a leading integrated pork company with a focus on providing safe meat products to Chinese consumers. The…

Paul, Weiss celebrated its 30th anniversary in Hong Kong with a cocktail reception at the Hong Kong Club, in the building where its offices are located.

Corporate partners Betty Yap and Jack Lange were recognized in The Legal 500 Asia Pacific Hall of Fame for their excellent achievement in private equity work in Hong Kong.

Corporate partner Jack Lange has been elected as the Chairman of the American Chamber of Commerce in Hong Kong (AmCham) for 2018.

Paul, Weiss has been recognized with Asia Women in Business Law Awards by the Euromoney Legal Media Group.