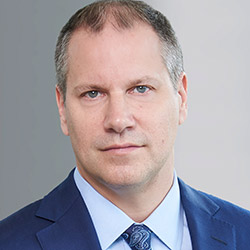 A partner in the Antitrust Group, Joseph Bial regularly represents clients in high-profile antitrust and commercial litigation in federal district and appellate courts, as well as before state and federal regulatory agencies. Joe also has extensive experience handling antitrust, international cartel and anti-monopoly cases in the United States, Europe and Asia. Clients have described Joe as “a terrific litigator; thoughtful, steady and thorough.”

Joe represents both defendants and plaintiffs in all varieties of antitrust litigation. With respect to litigation, Joe frequently represents defendants in government investigations into potential criminal price-fixing. He also represents defendants against antitrust class actions across many industries, including financial, pharma and manufacturing industries, among several others. Joe has also played a leading role in several high-profile monopolization cases on behalf of entrepreneurs in high-tech industries. He has also worked on numerous matters involving foreign jurisdictions, including throughout Europe and Asia.

Joe also has extensive experience in merger reviews, with a particular focus on the underlying economic issues and related expert work. He has played a leading role representing companies in merger reviews in high-tech, airlines, healthcare and other industries.

Joe is recognized by various directories as a leading antitrust lawyer. He is listed in Chambers USA for the Antitrust: Litigation Specialists (DC) category. He is also regularly identified in The Legal 500 US for the Antitrust: Merger Control and Antitrust: Civil Litigation/Class Action: Defense categories, where clients have noted that his “depth of expertise and passion for antitrust is unmatched,” and have recognized him for his “very smart” work involving antitrust and competition-related issues in Asia. He was named in The Best Lawyers in America for Antitrust Litigation, and he has been recognized in Who’s Who in Asia and as a top antitrust lawyer by Super Lawyers magazine. Also, Joe has been listed in the rankings of Lawdragon 500. Joe frequently writes and speaks on economic, competition and financial issues and has made numerous broadcast appearances, including on Bloomberg, FUJI TV (Japan) and international news channel NTN24.

Joe recently taught the introductory Econometrics course for Ph.D. students (in Economics) at George Mason University. He has also been an Adjunct Professor at George Mason School of Law, teaching Advanced Antitrust, and at the University of Alaska College of Business and Public Policy, teaching Business Law. Prior to his legal career, Joe worked as a stockbroker and later as an economist at the White House and has also testified as an economic expert and consulted as an economist. During law school, Joe was a research assistant to Nobel Laureate (in Economics) Ronald Coase at the University of Chicago.

Paul, Weiss, along with co-counsel from the ACLU, ACLU Tennessee, and Just City, achieved a significant victory in the Sixth Circuit on behalf of a class of all current and future medically vulnerable detainees in pre-trial detention…

Paul, Weiss recently prevailed in two cases before the Board of Veterans’ Appeals, securing remands on behalf of two veterans seeking financial compensation for injuries suffered during their service.