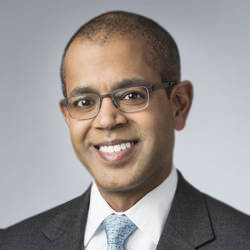 Chair of the Supreme Court and Appellate Practice Group and managing partner of the Washington office, Kannon Shanmugam is widely recognized as one of the nation's top appellate lawyers. He was named 2021 Appellate Litigator of the Year by Benchmark Litigation and is a finalist for The American Lawyer's 2022 Litigator of the Year. Kannon has argued 35 cases before the Supreme Court, including three cases in the 2021-2022 term. In all, he has argued over 100 appeals in courts across the country, including arguments in all thirteen federal courts of appeals and in numerous state courts.

A recent study found that, over the last five years, Kannon had the highest rate of successful petitions for review of any Supreme Court practitioner. He was lead counsel in the successful constitutional challenge to the structure of the Consumer Financial Protection Bureau, described by the Wall Street Journal as the “constitutional case of the year.”

Prior to private practice, Kannon served as an Assistant to the Solicitor General at the U.S. Department of Justice. He also served as a law clerk to Supreme Court Justice Antonin Scalia and to Judge J. Michael Luttig of the U.S. Court of Appeals for the Fourth Circuit.

Benchmark Litigation noted that Kannon is “one of the most respected and admired appellate practitioners” in the country. One longtime Supreme Court reporter recently said that Kannon “has perhaps the most eloquent and elegant manner … that I’ve ever seen in my 40 years covering the Court,” adding that he “projects calm, confidence, and authority from the moment he takes to the lectern.” Chambers USA described Kannon as “famous for his unflappable, calm, and disarming manner at oral argument,” and praised him as an “impeccable writer” and “great strategic mind.” Legal 500 called Kannon “a brilliant lawyer and tactician, with impeccable judgment and an optimal moral compass.”

Kannon has been recognized as one of the top 500 lawyers in the nation (Lawdragon magazine) and as one of the top 10 lawyers in Washington (Super Lawyers). He has been featured on numerous lists of top Supreme Court advocates, with Washingtonian magazine naming him one of its 20 people in Washington to watch. Kannon has been named a Law360 “Appellate MVP” four times in the last six years (2017, 2018, 2021, and 2022), and he has been selected as The American Lawyer’s “Litigator of the Week” three times.

Kannon is a member of the firm’s Management Committee. He has served as the co-chair of the American Bar Association’s Appellate Practice Committee and is also a past president of the Edward Coke Appellate Inn of Court, the principal bench-bar organization for appellate judges and lawyers in the Washington area. Kannon is the only practicing American attorney who is an honorary bencher of the Inner Temple, one of the four English Inns of Court.

Kannon has taught Supreme Court advocacy as an adjunct professor of law at Georgetown University Law Center. In the community, he has served as chair of the board of trustees of Thurgood Marshall Academy, a charter school in Southeast Washington that is one of the city’s highest-performing public high schools. He has devoted substantial time to pro bono representation in the areas of criminal law and religious liberty.

In the latest issue of The American Lawyer’s “Litigation Daily” column, litigation partner Kannon Shanmugam discusses how he prepared to argue three different appeals within the span of a week.

Litigation partner Kannon Shanmugam was interviewed on the July 12 episode of “The Dispatch,” a podcast hosted by The Atlantic columnist David French and former Justice Department spokeswoman Sarah Isgur.

Litigation partner Kannon Shanmugam was recognized as a Law360 2022 “MVP” in the Appellate category.

Kannon Shanmugam Is an American Lawyer “Litigator of the Year” Finalist

Kannon Shanmugam Is an American Lawyer “Litigator of the Year” Finalist

Litigation partner Kannon Shanmugam is a finalist for “Litigator of the Year” in The American Lawyer’s 2022 Industry Awards.