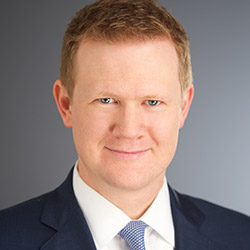 Kyle’s other restructuring matters include:

In 2022, Kyle was recognized as Turnarounds & Workout’s “Outstanding Young Restructuring Lawyer.” Kyle is also a finalist for The American Lawyer’s 2022 “Young Lawyer of the Year.” His work on Frontier Communication’s chapter 11 cases was recently recognized as the “Chapter 11 Restructuring (Mega)” winner for The Turnaround Atlas Awards 2022. In 2021, Kyle was named as one of The American Bankruptcy Institute's "40 Under 40" winners. Kyle is also recognized Lawdragon’s “500 Leading US Bankruptcy & Restructuring Lawyers,” by U.S. New – Best Lawyers and by The Legal 500 as a “Next Generation” lawyer in restructuring, and as a notable practitioner in structured finance: derivatives. He is also an active member of Practising Law Institute, most recently as a panelist for “Corporate Governance, and Sales of Assets” as part of the Bankruptcy & Reorganizations 2021: Current Developments program.

Litigation partner Chris Boehning was interviewed by The American Lawyer’s Ross Todd about the important contributions of a more than 50-lawyer Paul, Weiss team to the success of the wrongful death class action against Remington Arms…

Restructuring partner Kyle Kimpler is a finalist for “Young Lawyer of the Year” (Beyond Practice category) in The American Lawyer’s 2022 Industry Awards.

Restructuring partner Kyle Kimpler was named to the American Bankruptcy Institute’s 2021 “40 Under 40” honorees.