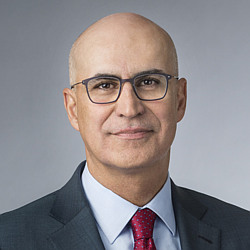 Marco V. Masotti is recognized as one of the country’s leading lawyers in the alternative asset management industry. For over 25 years, Marco has led and built the firm’s private funds team into one of the elite practices in the marketplace. He serves as Global Co-Head of the Private Funds Group and has served as a member of the firm’s Management Committee. Ranked Band 1 in Chambers, Marco is widely regarded as “one of the most exceptional lawyers in the area” for his “unparalleled experience and extraordinary reach in the fund formation space.” He is hailed as a “superstar” attorney who is “fantastic, dedicated to his clients and extremely experienced.” Marco has been recognized as a Law360 MVP in three areas, including Fund Formation, Private Equity and Asset Management.

Marco has a unique profile in the marketplace as an adviser to a wide variety of investment funds, including private equity funds, credit funds, growth capital funds, hedge funds and real estate funds. Over the course of his career, he has raised billions of dollars for his clients, including: Apollo, Atlas, Avenue, Brighton Park, Centerbridge, Clearlake, EagleTree, Gamut, General Atlantic, King Street, KKR, Liberty Strategic Capital, Oak Hill, OceanSound, Roark, Sageview, Searchlight, Silver Point, TowerBrook, Värde and Wellspring, among dozens of others.

In addition, Marco is a corporate adviser to many founders of alternative asset managers, including his representation of former Treasury Secretary Steven Mnuchin in connection with the formation of his private equity firm and initial fundraise, as well as former Treasury Secretary Timothy F. Geithner in connection with his joining a major private equity firm.

Marco has extensive investment management M&A experience. His representations include Baring Private Equity Asia in its approximately $7.5 billion sale to EQT AB; Oak Hill Advisors in its $4.2 billion sale to T. Rowe Price; EagleTree Capital in its investments from affiliates of AlpInvest Partners and Alberta Teachers’ Retirement Fund Board; Oak Hill Capital in a strategic minority investment by Stonyrock Partners; Daniel Och, founder and CEO of Och-Ziff Capital Management, in connection with his preferred investment in the company; Fortress Principals in connection with the sale of Fortress Investment Group to Softbank Group; KPS Capital Partners in its sale of a minority interest to Dyal Capital Partners; and Reservoir Capital in its sale of a minority investment to Credit Suisse.

Private Equity International named Marco one of “The 100 Most Influential of the Decade.” He has also been featured by The Deal as one of the “Movers & Shakers” in the industry, named by Crain’s New York Business to its annual “40 Under 40” list and profiled by the New York Observer as one of New York’s top corporate lawyers. Recognized as a Leading Lawyer by The Legal 500, clients say his “calm demeanor, depth of experience and creative approach to problem-solving make him a rare talent.” Who’s Who Legal ranks Marco as one of a select few Most Highly Regarded Individuals for private funds, commending him as “one of the smartest lawyers in funds work,” and he is also recognized as a Market Leader by IFLR1000 for his work in investment funds.

Marco is a sought-after thought leader in the alternative asset management industry. He frequently provides commentary on developments in the private funds marketplace and has been quoted extensively in the Financial Times, The New York Times, The Wall Street Journal and elsewhere, as well as providing guest commentary on television news networks, including Bloomberg Television. He has presented at numerous industry conferences.

Marco serves as a director of the Friends of the Legal Resources Centre, South Africa’s largest public interest, human rights law clinic, and he is part of the Founding Advisory Board for the Sorensen Center for International Peace and Justice at the City University of New York School of Law. In addition, Marco serves on the ILR Advisory Council of Cornell University.

Marco is the controlling partner of the Sharks professional rugby team located in Durban, South Africa.

Marco was awarded a Fulbright Placement Award upon graduating from the University of Natal School of Law.

Credit Fundraising at a Glance looks at the latest semiannual trends on global and U.S.-based credit fundraising. Credit fundraising stabilized in H2 as $102.8 billion was raised globally, up 7% from $95.2 billion in H1 2022. Investor …

Attached is a link to the Paul, Weiss Private Funds Regulatory Compliance Calendar for 2023. The calendar covers certain (but not all) regulatory obligations of a typical U.S.-based private fund adviser. Please note that any words…

Private Funds Group Co-Head Marco Masotti spoke with the Financial Times’ FundFire about a possible private equity bounce back by the end of 2023.

Apollo Closes on $2.4 Billion in Commitments for Inaugural Accord+ Fund

Apollo Closes on $2.4 Billion in Commitments for Inaugural Accord+ Fund

Paul, Weiss advised Apollo in the formation of and fundraising for its Apollo Accord+ Fund (Accord+), its commingled multi-asset opportunistic credit offering, which closed on November 21 with $2.4 billion in commitments.

Jennifer Songer, former Policy Counsel at the U.S. Securities and Exchange Commission, has joined the firm as counsel in the Private Funds Group of the Corporate Department. Ms. Songer, who will be resident in Washington, D.C., will…

Corporate partner Marco Masotti was honored with a Law360 2020 MVP Award in the Fund Formation category.