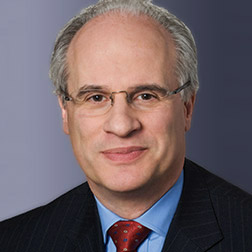 Of counsel in the Corporate Department, Mark Bergman is the former Head of the Global Capital Markets Practice Group. Mark joined Paul, Weiss in 1982 and was elected to partnership effective January 1, 1991. In the early 1990s, he was the resident U.S. corporate partner in the firm’s Paris office. Mark opened the firm’s London office in 2001.

Mark had extensive experience in corporate finance and securities transactions. Offerings in which he was involved ranged from traditional offerings of equity and debt securities (including high yield debt and investment grade Yankee bonds) to offerings of perpetual and long-dated hybrid securities for financial institutions. Mark was involved in global capital markets transactions and other securities offerings for issuers in a number of countries in Europe, Asia and Africa, as well as in the United States. He represented issuers listing securities on stock exchanges in the United States, the European Union, Switzerland, South Africa and Hong Kong. For issuers of high yield debt, in addition to offerings, he was involved in restructurings, refinancings and other liability management transactions.

Mark advised a range of listed companies in connection with reporting and other obligations under the securities laws, establishment of corporate compliance programs, compliance with corporate governance standards under the securities laws and stock exchange rules, and risk oversight and risk management matters. He advised companies in connection with SEC and other U.S. regulatory investigations, and stock exchange proceedings.

In the cross-border M&A arena, Mark was involved in cross-border tender offers, exchange offers and going private transactions. He also acted for sponsors in connection with leveraged acquisitions.

The International Organization of Securities Commissions (IOSCO) has published a report that sets out a vision for a global baseline for sustainability standards for issuers. The report sets out expectations for an ISSB that would sit …

Paul, Weiss advised Grupo Antolin-Irausa S.A.U. in the issuance of €390 million 3.50% senior secured notes due 2028, listed on the Official List of the Luxembourg Stock Exchange for trading on the Euro MTF Market.

This past week the SEC closed its period of public comment on the topic of climate-change disclosures after receiving hundreds of submissions. These comments are the latest in an ongoing discussion among SEC Commissioners and staff,…

Firm chairman Brad Karp moderated a discussion for the Leaders Council, “Climate Change and Environmental Sustainability,” with guest speakers John Coates, acting director of the Division of Corporation Finance of the U.S. Securities…

Corporate partner Mark Bergman, along with Jean Rogers, founder and former CEO of the Sustainability Accounting Standards Board, co-authored an article in Corporate Governance Advisor on Europe’s focus in recent years on sustainable…

The Staff of the SEC’s Division of Corporation Finance recently announced it is suspending, pending review, enforcement of its 2019 guidance and 2020 rule changes regarding the treatment of proxy voting advice as proxy solicitations.

Chambers Recognizes Paul, Weiss as Leading Firm for Capital Markets in the UK

Chambers Recognizes Paul, Weiss as Leading Firm for Capital Markets in the UK

Chambers UK has recognized Paul, Weiss as a leading firm in debt and equity capital markets. The firm is ranked in Band 4 for both practices. London-based Securities partner Mark Bergman is also ranked, earning a Band 3 …