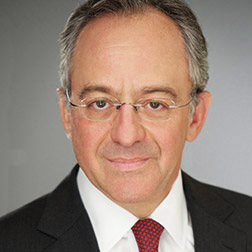 Bob has been a litigator and trial lawyer at Paul, Weiss for 35 years, and is a former co-chair of the Litigation Department, a former member of the firm’s Management Committee, and the current co-chair of the firm’s legal ethics committee. Bob has twice been named The American Lawyer’s “Litigator of the Week,” first for his successful trial and appellate work in an antitrust and consumer deception case in the Eastern District of Texas and the Fifth Circuit, and most recently for winning a trade secrets and noncompetition trial involving IBM and Microsoft in the Southern District of New York. Bob has been recognized by U.S. News & World Report as one of the “Best Lawyers” in U.S. Antitrust Litigation and most recently as one of Lawdragon’s 500 Leading Litigators in America. He also litigates voting rights cases as the Co-Chair of the Brennan Center for Justice.

Bob has a nationwide practice trying cases and arguing appeals, primarily in the areas of antitrust, consumer deception and false advertising, and corporate commercial disputes. His work spans numerous industries and businesses, including cloud computing and information technology, medical devices, pharmaceuticals, and private equity. He appears in state and federal courts across the country, including currently California, Florida, New York, Delaware, North Carolina, New Jersey, Michigan and Washington. Bob has argued appeals in the Second, Third, Fifth and Eleventh Circuits, as well as many state appellate courts.

Bob represents medical device manufacturer Becton Dickinson (BD) in several antitrust purchaser class actions, including cases in Illinois, New Jersey and Georgia. In addition, Bob was lead counsel for BD in a jury trial in Tyler, Texas involving antitrust and consumer deception claims, where he secured a defense verdict on 11 of 12 counts and then won the appeal in the Fifth Circuit on the 12th count for attempted monopolization by deception. Bob also lead the Paul, Weiss team in the complete dismissal, with prejudice, of an antitrust class action against BD in which a putative class of all U.S. hospital and healthcare providers alleged conspiracy with the distributors of its products to inflate the prices of syringes and IV catheters by excluding competitors from the market.

Most recently, Bob was trial counsel for medical device manufacturer Bard in an antitrust jury trial in the U.S. District Court for the Northern District of New York, where our team secured a complete defense verdict rejecting the plaintiff’s $450 million damages claim.

He represents IBM in unfair competition litigation and government investigations. Bob is also trial counsel for PharMerica, one of the country’s leading pharmacy companies, MacAndrews & Forbes, Novo Nordisk and Viacom.

Bob also represented CIT Group in winning a motion to dismiss before the U.S. District Court for the District of Delaware, and confirming the victory on appeal to the Third Circuit in a price-fixing conspiracy case. CIT and co-defendants were accused of violating Section 1 of the Sherman Act by sharing confidential information about their clients’ customers and reaching agreements regarding the terms and conditions of credit to be extended.

In addition to his commercial practice, Bob regularly litigates voting rights cases and Constitutional lawsuits involving gerrymandering, one-person/one-vote, and voter suppression. Bob serves as the Co-Chair of the Board of the Brennan Center for Justice at New York University School of Law.

On October 26, Paul, Weiss filed an amicus brief on behalf of the country’s leading historians of the American Revolutionary and Founding Era in Moore v. Harper.

As reported by The New York Times, Politico and CNN, Paul, Weiss, together with co-counsel from the NAACP Legal Defense Fund, the ACLU, the ACLU of Louisiana, and Louisiana lawyers John Adcock and Tracie Washington, achieved a…

Paul, Weiss secured a major appellate victory in the Seventh Circuit for Becton, Dickinson and Company (BD), when the Court of Appeals affirmed the dismissal with prejudice of an antitrust class action against BD.

Law360 has named Paul, Weiss as one of its Pro Bono Firms of 2012. The firm is acknowledged for its impressive pro bono history, as well as its "large body of high-stakes, high-profile pro bono work."  The article highlights several…