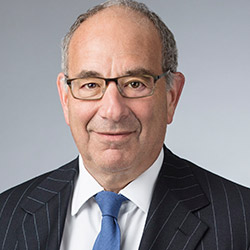 Robert B. Schumer is a member of the Mergers and Acquisitions Group and former Chair of the Corporate Department from 2008 to 2020. Bob regularly provides strategic counsel to corporations and their boards of directors and special committees on corporate governance, fiduciary duty, M&A and other corporate matters affecting policy and strategy. Over the past 30 years, Bob has been engaged in many high-profile matters that include the negotiation and structuring of M&A, dispositions, joint ventures, leveraged buyouts and contested matters, including numerous unsolicited offers and proxy contests, on behalf of a diverse range of clients, including public and private companies, private equity funds, financial institutions and other entities. He was previously the Chair of the New York City Bar Association’s Committee on Mergers, Acquisitions and Corporate Control Contests. Bob also serves as a Director of New Alternatives for Children, Inc., on the Judicial Selection Committee of Senator Charles Schumer, on the Board of Trustees of The Paley Center for Media and on the Board of Trustees of the New York City Police Foundation.

Bob has been recognized in the top band of the leading M&A lawyers as well as the top band of media & entertainment lawyers in New York by the peer review organizations Chambers USA, The Legal 500, Best Lawyers in America and Law Business Research’s International Who’s Who of Merger and Acquisition Lawyers. He was named a “Dealmaker of the Year” (2020) by The American Lawyer for his representation of the Special Committee of the Board of Directors of CBS Corp. in its $40 billion merger with Viacom to form ViacomCBS and recognized by The New York Law Journal in its list of 2020 “New York Trailblazers.” He was previously named “Dealmaker of the Year” (2011) for his representation of Warner Music in its $3.3 billion acquisition by Access Industries and for his representation of Time Warner Cable in its $3 billion acquisition of cable company Insight Communications Co., and was also named “Dealmaker of the Year” (2005) for his representation of Time Warner Inc. in its successful $18 billion acquisition of Adelphia Communications Corporation’s cable systems alongside Comcast Corporation. Bob’s work on behalf of Time Warner Cable in its proposed merger with Comcast was commended by the Financial Times’ “US Innovative Lawyers 2014.” In 2019, he was recognized by The National Law Journal as a Sports & Entertainment Trailblazer for his work in the entertainment industry. In 2018, he was selected by The New York Law Journal as a “Distinguished Leader,” an award that recognizes attorneys in leadership roles who achieved impressive results in the past year, and was also highlighted by The National Law Journal as an M&A Trailblazer, recognizing his trail-blazing work over many years in the deal-making arena. In 2017, Bob was one of only 10 lawyers named to The Legal 500 Hall of Fame in the M&A: large deals ($1bn+) category. In 2016, Bob was one of only five attorneys named a Mergers & Acquisitions MVP by Law360 and was also featured in Variety’s “Dealmakers Impact Report,” which spotlights the top lawyers in the entertainment industry. In both 2009 and 2011, he was selected by The Hollywood Reporter as one of its “Power Lawyers.” He was featured in The American Lawyer’s “Forty-Five under 45 - Forty-five young lawyers who are making their mark today and will lead the profession tomorrow” and in Crain’s “40 under 40 - an annual list of New York City’s young movers and shakers,” both of which were published in 1995.

Recently, Bob has been the lead lawyer on numerous high-profile transactions, including:

Additional high-profile transactions in which Bob has been the lead lawyer include:

Bob has also been involved in numerous other joint venture arrangements ranging from the formation of an international consortium that acquired the phosphate division of W.R. Grace, to the creation of Courtroom Television Network, the venture that owns the cable television channel known as "Court TV" and the $1.2 billion restructuring of the venture owning Six Flags Theme Parks.

With spring’s arrival here in the Northeast, the M&A market has also revived by certain measures. While deal count continued to decline (decreasing by 14% both globally and in the U.S. since March), April saw increases in total…

Despite being a record-breaking year overall, 2021 ended on a bit of a down note. Both U.S. and global sponsor-related M&A deal value dropped significantly in December, with total deal value down 51% in the U.S. and 33% globally…

Sponsor-related M&A deals rebounded in November after a relatively slow October. Total deal value increased by 181% in the U.S. and by 159% globally, even as the number of sponsor-related transactions decreased for the third…

On November 17, 2021, the SEC adopted final rules (available here) requiring both companies and dissidents to use universal proxy cards that must include all director nominees in contested director elections. These changes, effective…

U.S. and global M&A activity decreased across almost all measures in October as compared to September. The number of U.S. deals decreased by 47% and total U.S. deal value was down by 27%.  Globally, deal count declined by 30%, and …

Corporate chair Robert Schumer was recognized as a Sports & Entertainment Trailblazer by The National Law Journal.

Corporate partner Robert Schumer was recognized as an M&A Trailblazer by The National Law Journal.

Corporate partner Robert Schumer was recognized as a 2018 "Distinguished Leader" by the New York Law Journal.