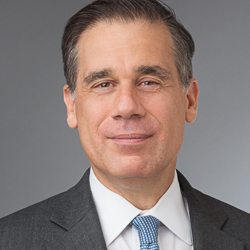 A partner in the Tax Department, Robert Holo is widely recognized as a leading lawyer in federal tax law. Rob has advised on a broad range of international and domestic transactions, including all types of mergers, acquisitions, tax-free reorganizations and spin-offs; cross-border tax matters; joint ventures; and capital markets and financing transactions. He has a robust international tax practice focusing on cross-border mergers and acquisitions, financings and capital markets transactions and advising clients on migration, redomiciliation and expatriation transactions.

Rob has advised numerous banks, domestic and foreign corporations, private equity funds and investors in connection with the structuring of acquisitions and dispositions. Rob also advises on international capital markets and joint venture transactions, with particular experience in deals across Asia, Latin America and Europe.

Rob has been recognized as a leader in tax law by publications such as Chambers USA and The Legal 500, and is a frequent writer and speaker on tax aspects of corporate transactions. He recently spoke at the 78th NYU Institute on Federal Taxation, on a panel titled, “No Claim, No Gain: An Examination of the Use of Tax Insurance in M&A Transactions.”

Rob is a member of the Tax Section of both the American Bar Association and the New York State Bar Association. He is also a Trustee of the UC Santa Cruz Foundation. Rob received his J.D. from the University of California, Los Angeles, where he was elected Order of the Coif and was an editor of the Law Review.

On December 27, the IRS issued initial guidance on the corporate stock repurchase excise tax and the corporate alternative minimum (CAMT) tax, respectively, effective January 1, 2023. We provide an overview of key takeaways from the…

Paul, Weiss advised KKR as lead investor in a $400 million strategic investment round in Skydance Media.