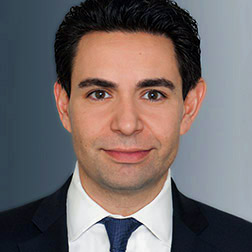 Roberto has advised the world’s largest banks, investment companies, and technology companies across a range of issues. His experience spans economic sanctions, anti-money laundering, export controls and national security matters; consumer financial protection; payments and cryptocurrency; the False Claims Act; workplace discrimination; and privacy and data security. He has represented clients before Treasury, Commerce, DOJ and a number of U.S. Attorney’s offices, the banking agencies (including the OCC, Federal Reserve, CFPB, and the New York DFS), the SEC and CFTC and various congressional committees.

Roberto was recognized as one of the “500 Leading Lawyers in America” by Lawdragon. In 2017, he was elected as a member of the American Law Institute. Roberto was named a “D.C. Rising Star” by the National Law Journal, a “Rising Star in Banking” by Law360 and a “Top Lawyer Under 40” by the National Hispanic Bar Association. At Treasury, Secretary Jacob J. Lew awarded Roberto the Treasury Medal in recognition of his accomplishments and leadership as Deputy General Counsel.

Roberto was a law clerk to Justice John Paul Stevens on the U.S. Supreme Court and Judge Guido Calabresi on the Second Circuit Court of Appeals.

Prior to Paul, Weiss, Roberto served as Associate White House Counsel and Special Assistant to President Obama, where he counseled on Dodd-Frank, homeland security, congressional investigations, and a variety of sensitive internal matters. He then became a founding employee of the Consumer Financial Protection Bureau (CFPB) and served as Principal Deputy General Counsel. In that role, he advised the Director on all rulemakings, enforcement actions, and significant supervisory matters.   Roberto then became Deputy General Counsel of the Treasury Department, where he oversaw major litigations, congressional investigations, and sensitive internal matters and supervised over 100 lawyers in the areas of sanctions, anti-money laundering, Dodd-Frank, cybersecurity, and ethics and employment matters.

Roberto speaks and writes frequently on compliance and regulatory issues. His publications have appeared in the National Law Journal, the Harvard Law School Forum on Corporate Governance and Financial Regulation, and the Columbia Law School’s Blog on Corporations and the Capital Markets. Roberto was selected to receive the “Law360 Distinguished Writing Award.”

Roberto is a member of Paul, Weiss’s diversity and inclusion task force, and chairs the Washington D.C. office’s diversity committee. Prior to his government service, he served as a fellow at a non-profit organization litigating employment discrimination and related cases.

The DOJ recently announced obstruction of justice, money laundering and other charges against 13 individuals in three PRC espionage cases in which, among other things, the DOJ alleged that agents of the PRC bribed a U.S. government…

Litigation partner Roberto Gonzalez and associate Joshua Thompson served as contributing editors of the International Comparative Legal Guide - Sanctions 2023, which is the fourth edition of this handbook.

Roberto Gonzalez Elected to the Council of the American Law Institute

Roberto Gonzalez Elected to the Council of the American Law Institute

Litigation partner Roberto Gonzalez has been elected to the Council of the American Law Institute (ALI), an organization dedicated to clarifying, modernizing and improving the law and the administration of justice by publishing…

Litigation partner Roberto Gonzalez has been elected as a member of the American Law Institute, an organization dedicated to clarifying, modernizing and improving the law and the administration of justice.

The Legal Aid Society recognized several Paul, Weiss attorneys and the firm as a whole at the 2017 Pro Bono Publico Awards for their pro bono contributions over the past year.

Litigation partners Jessica Carey and Roberto Gonzalez have been selected to receive the “Law360 Distinguished Writing Award” at the 2017 Burton Awards.

Real estate partner Salvatore Gogliormella and litigation partner Roberto Gonzalez have been named to Law360's Rising Stars for 2016 in the Real Estate and Banking categories, respectively.