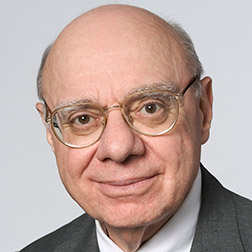 Of counsel in the Litigation Department, retired partner Sidney S. Rosdeitcher concentrated in antitrust litigation and counseling but also had experience in a variety of other fields of commercial litigation. Mr. Rosdeitcher had an extensive appellate practice, which included two arguments in the United States Supreme Court.

Since his retirement, Mr. Rosdeitcher has devoted himself to a pro bono practice involving civil liberties and civil rights issues. In that connection, he served as an adviser and fellow at the Brennan Center for Justice at NYU Law School and chaired both the New York City Bar Association's Committee on Civil Rights and that Association's Task Force on National Security and the Rule of Law.

His activities have included participating in the writing of appellate and amicus briefs on civil liberties issues raised by post 9/11 counter-terrorism practices, such as the treatment of persons detained as suspected terrorists and invasive surveillance activities; voting rights issues such as the constitutionality of the preclearance requirements of the Voting Rights Act, state photo ID requirements for voting and restoration of voting rights denied by felony disenfranchisement laws; affirmative action in higher education; reapportionment of state legislative districts; and access to justice issues, including efforts to assure indigents effective assistance of counsel in criminal cases and in certain types of civil proceedings. Mr. Rosdeitcher also continues to serve as a member of the amicus committees of the American Bar Association's Section on Civil Rights and Social Justice and the Lawyers Committee for Civil Rights Under Law, where he has long been a Board member. Since 2008, Mr. Rosdeitcher also has been teaching a constitutional law seminar for undergraduates at Columbia University.

Mr. Rosdeitcher also engaged in extensive pro bono activity prior to his retirement. Among other things, Mr. Rosdeitcher was lead counsel in the successful defense, at trial and on appeal, of the City of Santa Fe's living wage ordinance, significantly raising the hourly minimum wage for Santa Fe workers, which is now one of the highest in the nation. Mr. Rosdeitcher also won an important asylum case in the Third Circuit in which the court of appeals overturned a denial of asylum, finding that the refugee's due process rights were violated. Recognized for his commitment to helping refugees secure asylum, Mr. Rosdeitcher received the Marvin E. Frankel Pro Bono Award from Human Rights First. Mr. Rosdeitcher also received the Segal-Tweed Founders Award and the Whitney North Seymour Award from the Lawyers' Committee for Civil Rights Under Law, for his contribution to equal justice under law while serving as a Board member of that organization. In 2016, he received the Access to Justice Award from Legal Services for the Hudson Valley.

Mr. Rosdeitcher also has served as a member of the New York City Bar Association's Executive Committee and as Chair of the Association's Council on International Affairs, the Association's Committee on International Human Rights, and its Committee on Professional and Judicial Ethics. In addition to the constitutional law seminar he currently teaches at Columbia, Mr. Rosdeitcher previously taught courses in civil liberties at Brooklyn Law School and professional ethics at Columbia Law School. He has published articles on a variety of topics, including the criteria for evaluating the qualifications of Supreme Court nominees, assistance of counsel in plea bargaining, the constitutionality of the Affordable Care Act and previews of Supreme Court cases addressing civil liberties and civil rights issues. He also co-authored reports published by the New York City Bar Association on human rights conditions in Uganda and on the impact of the Military Commissions Act on U.S. obligations under Common Article 3 of the Geneva Conventions.

From 1961-62, Mr. Rosdeitcher served as a lawyer in the Office of Legal Counsel at the United States Department of Justice and he took a leave from Paul, Weiss to serve as an assistant to Commissioner Philip Elman of the Federal Trade Commission from 1965 to 1966.

Paul Weiss, in collaboration with the Brennan Center for Justice and local counsel, successfully blocked a proposal by the Missouri state legislature to overturn redistricting reforms that voters overwhelmingly approved in 2018.

In a landmark decision, the Connecticut Supreme Court ruled that the families of victims of the 2012 Sandy Hook Elementary School shooting could sue the manufacturers, distributors and sellers of the military assault rifle used by the …

On September 13, the Brennan Center for Justice published of counsel Sidney Rosdeitcher’s article, “The Arpaio Pardon and the President’s Constitutional Duties.”

A Supreme Court Victory for Racial Diversity in College Admissions

A Supreme Court Victory for Racial Diversity in College Admissions

Of Counsel Sidney Rosdeitcher spoke on a panel at Columbia University as part of an Undergraduate History Council event, titled "The Supreme Court in Historical Perspective: Politics and Legal Change."

As reported in The New York Times and other media outlets, invoking the principle of "One Person, One Vote", the Supreme Court of the United States issued an 8-0 decision in Evenwelv. Abbott, upholding the…

upreme Court Previews: “The Right to Remain Silent” and “Free Speech and the War Against HIV/AIDS”

upreme Court Previews: “The Right to Remain Silent” and “Free Speech and the War Against HIV/AIDS”