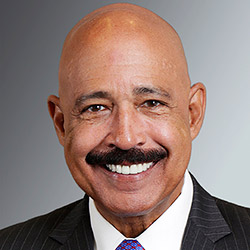 A partner and co-chair of the Litigation Department, Ted Wells has extensive experience in white-collar defense and complex civil and corporate litigation, including SEC investigations, healthcare fraud, FCPA, AML and OFAC investigations, high-profile environmental matters and complex class action litigation. For more than three decades, prominent business figures and politicians, and leading companies in a range of industries have entrusted their gravest legal challenges to him. In particular, Ted is among the nation’s best-regarded trial lawyers, having tried numerous multibillion-dollar cases before judges and juries. Clients have recognized Ted as "an outstanding lawyer who provides sage advice on the most complex of subjects” adding that “he commands respect in every venue in which he appears."

The National Law Journal named Ted one of “The Decade’s Most Influential Lawyers” in 2010 and over the years has repeatedly recognized him as one of the 100 most influential lawyers in America, including naming him the “Lawyer of the Year” in 2006. Ted has also been recognized as one of the outstanding jury trial lawyers in the United States by numerous publications, including Chambers USA, which has noted that Ted “is considered by many to be ‘the best trial lawyer in the country.’” Since 2013, Chambers USA has named Ted a Star Individual in three categories: nationwide trial litigation, New York general commercial litigation and New York white-collar crime and government investigations and was recently recognized in the nationwide spotlight table for crisis management. Benchmark Litigation has named him in similar categories, including winning individual recognition as “Trial Lawyer of the Year” for 2019, and being inducted into the Hall of Fame in 2020. The Legal 500 has recognized him as a Leading Lawyer in white-collar criminal defense and as a Leading Trial Lawyer. Additionally, in 2018 and 2019, Chambers USA named Ted a Recognized Practitioner in sports law, and in 2018 The Legal 500 recommended him in the antitrust-cartel category. Ted has also been named to The National Law Journal’s 2015 “Litigation Trailblazers” list, which honors 50 individuals who have changed the practice of litigation through the use of innovative legal strategies. Ted has been named The American Lawyer’s “Litigator of the Week” multiple times, including in 2019 for his work on behalf of ExxonMobil in a landmark $1.6 billion climate-change lawsuit brought by the New York Attorney General’s office and for his successful defense of New Jersey governor Phil Murphy in a high profile preliminary injunction matter. In 2017, Ted received the New York Law Journal’s “Lifetime Achievement” award.

Ted’s significant representations of politicians and high-ranking individuals in business and finance include the successful defense of:

With extensive experience in corporate governance issues, Ted previously served on the Board of Directors of CIT Corporation, a New York Stock Exchange company, where he was a member of CIT’s audit committee.

Ted is a fellow of the American College of Trial Lawyers. He has served as co-chair of the White-Collar Criminal Section of the National Association of Criminal Defense Lawyers. He has been a faculty member of the Practising Law Institute Trial Advocacy Program, a teaching team member of the Harvard Law School Trial Advocacy Workshop and a lecturer at the Securities Regulation Institute. He has lectured on the use and scope of the RICO statute, the defense of securities, healthcare and environmental criminal and civil matters, federal grand jury procedures and federal sentencing guidelines.

Active in social, political and community affairs, Ted served as national treasurer for Senator Bill Bradley’s presidential campaign and is the chairman emeritus of the NAACP Legal Defense and Educational Fund Board of Directors. He previously served, on a pro bono basis, as general counsel to the New Jersey NAACP, New Jersey co-chairperson of the United Negro College Fund and general counsel to the New Jersey Democratic Party. Ted is a member of the American Academy of Arts and Sciences. Ted is a Fellow of the Harvard Corporation, the governing body of Harvard University.

Ted served as an editor of the Harvard Civil Rights-Civil Liberties Law Review.

Litigation partner Ted Wells will speak on a Practising Law Institute (PLI) panel, “First Impressions: Why Your Opening Statement Is So Important,” as part of PLI’s “Trial by Jury 2022” program.

Litigation partner Ted Wells shared his thoughts on the ongoing struggle for racial equality following the murder of George Floyd with Forbes in “Two Years After George Floyd, Black Leaders Reflect On Change.”

Paul, Weiss achieved a significant victory for Carnival Corp. & plc, the world’s largest cruise operator, and Carnival’s CEO, Arnold Donald, obtaining the dismissal with prejudice of all claims in a COVID-19-related securities…

Litigation partners Ted Wells and Richard Rosen were recognized by The American Lawyer’s “Litigation Daily” column for winning the dismissal with prejudice of a COVID-19-related securities class action against Carnival Corp. &…

Ted Wells Elected to the American Academy of Arts and Sciences

Ted Wells Elected to the American Academy of Arts and Sciences

Litigation partner Ted Wells has been elected to the American Academy of Arts and Sciences, a society founded in 1780 honoring the country’s most accomplished artists, scholars, scientists and leaders.

Paul, Weiss has been recognized with several awards as part of Benchmark Litigation’s annual United States awards program, with litigation partner Ted Wells winning individual recognition as “Trial Lawyer of the Year” and receiving a…

Litigation partner Ted Wells has been named to the NJBIZ 2019 “Law Power 50” list.