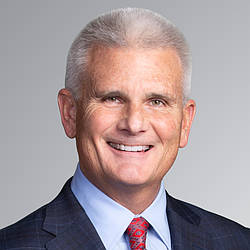 A partner in the Litigation Department, Walt Brown has been on the front lines of many of the most significant government investigations, prosecutions and litigations for 25 years. He represents companies and individuals in connection with criminal and regulatory investigations, parallel civil and administrative litigation and proceedings, and complex business litigation, as well as in crisis management matters. Recognized by Chambers USA as a “widely respected white collar practitioner,” clients have described Walt as a “brilliant attorney and strategist who is deeply respected for his investigation and trial skills.”

Earlier in his career, Walt served as an Assistant U.S. Attorney in the Criminal Division of the U.S. Attorney’s Office for the Central District of California, where he tried 20 felony cases to verdict and handled numerous appeals before the Ninth Circuit.

Walt has been recognized by numerous legal industry publications and directories. The American Lawyer recognized Walt in 2021 among the inaugural “West Trailblazers” for his achievements as a white collar defense attorney. The Daily Journal named Walt to its 2021 list of Top White Collar Lawyers in California and to its 2020 list of Top Trade Secrets Lawyers in California, while Benchmark Litigation recognized Walt as its “White-Collar Litigator of the Year – California” in 2020; as a California Litigation Star in 2018; and as one of the Top 100 Trial Lawyers in the United States in 2017. Chambers USA has recognized him as a leading lawyer in the white collar and government investigations area since 2005, with interviewees calling him “a real star” and a “brilliant attorney.” Walt is also Recommended by The Legal 500 US in the “Corporate Investigations and White Collar Criminal Defense” and “Securities Litigation: Defense” categories, among other recognitions.

Walt’s cases have spanned securities fraud, antitrust offenses, the FCPA, health care fraud, trade secret misappropriation and government fraud. He is frequently engaged by public and private companies and audit and special committees to conduct internal investigations. He has successfully represented clients in trial and appellate courts throughout the United States, most notably obtaining the recent complete acquittal of a former tech executive at FitBit in a high-profile criminal trade secrets jury trial in the Northern District of California.

Among his many other significant matters, Walt represented the CEO and other senior corporate officers of Solyndra in connection with investigations by the DOJ and the U.S. Congress, and a Fortune 500 energy company in connection with investigations by the DOJ’s Enron Task Force, the SEC, the CFTC and FERC arising out of California's energy crisis. He also has represented the audit committee of a telecommunications company, the controller of a pharmaceutical company, and the chief compliance officer of a global medical device company, among others, in DOJ FCPA investigations.

Walt currently serves on the Board of Governors for the Association of Business Trial Lawyers – Northern California Chapter, the Board of Directors of the Notre Dame Law Association, and the Notre Dame Law School Advisory Council. He is a member of the ABA Litigation, Antitrust and Criminal Justice sections, and was previously the co-chair of the ABA White Collar Crime Northern California Regional Subcommittee. He previously served on the Executive Board of the Bar Association of San Francisco Criminal Justice Section.

In this memorandum, we survey 2021 U.S. economic sanctions and anti-money laundering developments and trends, and provide an outlook on 2022. We also provide thoughts on compliance and risk mitigation measures for a potentially…

Litigation partner Walt Brown was recognized as a “Top White Collar Lawyer” by the Daily Journal.

Litigation partners Walter Brown and Melinda Haag were recognized among the inaugural “West Trailblazers” by The American Lawyer.