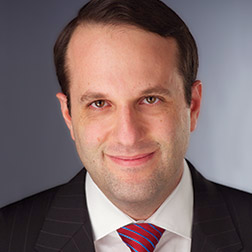 A partner in the Litigation Department, Bill Michael has extensive experience in antitrust litigation and plays a lead role in many of the firm’s most consequential antitrust engagements, including business-critical litigation, appellate matters, and government investigations. Clients have described Bill as “a razor-sharp lawyer who . . . can think around corners,” “brilliant,” “a great writer,” “able to handle the most complex legal issues,” and “an excellent oral advocate.”

Bill was recently shortlisted as Litigator of the Year by Global Competition Review's 2023 awards and recognized in the 2021 and 2022 editions of Chambers USA in the Antitrust (NY) category.

Bill is the co-author of the “United States” chapter in the tenth and eleventh editions of The Public Competition Enforcement Review and the co-author of the chapter titled “Settling an Antitrust Case” in Settlement Agreements in Commercial Disputes: Negotiating, Drafting & Enforcement. Bill has also authored several articles on antitrust-related issues for publications that include the New York Law Journal, Law360 and Competition Policy International. He previously served as Chair of the Editorial Board of The Antitrust Practitioner, a publication of the American Bar Association’s Section of Antitrust Law Civil Practice and Procedure Committee.

Prior to joining Paul, Weiss, Bill was a trial attorney in the Antitrust Division of the United States Department of Justice, where he focused on civil merger and non-merger investigations in the telecommunications and media industries.

In law school, Bill was a senior editor of the Yale Law Journal.

Paul, Weiss filed an amicus brief in the Appellate Court of Maryland on behalf of the National Association of Criminal Defense Lawyers (NACDL) in Young Lee, as Victim’s Representative v. State of Maryland.

The U.S. Department of Justice Antitrust Division leniency policy allows organizations to avoid criminal prosecution for violations of section 1 of the Sherman Act in certain circumstances. A recent update to the policy adds a prompt…

Paul, Weiss secured a major appellate victory in the Seventh Circuit for Becton, Dickinson and Company (BD), when the Court of Appeals affirmed the dismissal with prejudice of an antitrust class action against BD.

On March 7, the Ninth Circuit affirmed a lower court’s dismissal of a complaint alleging that manufacturers of dynamic random access memory (DRAM) conspired to reduce their output in violation of Section 1 of the Sherman Act. The…