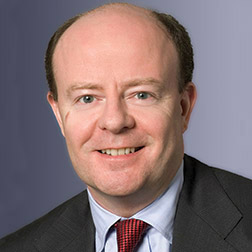 A partner in the Litigation Department and co-chair of the Antitrust Practice Group, Aidan Synnott focuses on antitrust litigation and compliance, bankruptcy litigation and other complex commercial litigation. Clients say Aidan is “sharp, commercially minded, responsive and overall excellent to work with” and “has achieved exceptional results in the most difficult of circumstances.”

Aidan has extensive trial experience in state and federal courts as well as in alternative dispute resolution forums such as the LCIA, ICC, AAA and JAMS. In addition, he frequently represents clients in antitrust investigations by the governmental agencies of the United States and the European Union.

Antitrust merger clearance and investigation representations Aidan has led include:

Aidan is a fellow of the American Bar Foundation. He has been an associate editor of the Antitrust Law Journal, a member of the Editorial Board of the American Bar Association’s Annual Review of Antitrust Law Developments, co-chair of the New York State Bar Association Section of Commercial and Federal Litigation’s Committee on Antitrust and a member of the Executive Committee of the Section. He currently serves on the Executive Committee of the State Bar’s Antitrust Section. Aidan has been a guest lecturer and speaker at New York University School of Law, The Wharton School and the University of Michigan Law School, and has published extensively in the areas of antitrust and intellectual property law. Aidan is the co-author of the “United States” chapter in the last several editions of The Public Competition Enforcement Review and served as General Editor of the Sixth through Eleventh editions.

Aidan continues to be recognized by Chambers USA, The Legal 500, U.S News & World Report/Best Lawyers in America, Super Lawyers, “The International Who’s Who of Competition Lawyers & Economists” by Who’s Who Legal, and most recently, as one of the "Leading Litigators of America" by Lawdragon 500.

Sanctuary for Families honored a team of attorneys from Paul, Weiss and O’Melveny & Myers at the Above & Beyond Achievement Awards and Benefit.

The Legal Aid Society recognized several Paul, Weiss attorneys and the firm as a whole at the 2017 Pro Bono Publico Awards for their pro bono contributions over the past year.

New York City Public Advocate Letitia James recognized Paul, Weiss with a proclamation praising the firm's commitment to equal justice for all New Yorkers. The firm received the honor for its assistance in asserting the…