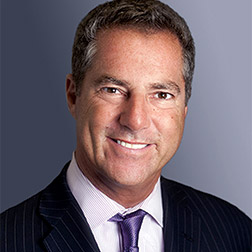 Brad Karp has been the Chairman of Paul, Weiss since 2008. One of the country’s leading litigators and corporate advisers, Brad has successfully guided numerous Fortune 100 companies, global financial institutions and other companies and individuals through “bet the company” litigations, regulatory matters, internal investigations, and corporate crises. Prior to being named chairman, Brad chaired the firm’s Litigation Department. Brad has spent his entire career at Paul, Weiss, beginning as a summer associate.

Brad has been selected multiple times as the “Lawyer of the Year” and the “Litigator of the Year.” Brad has earned dozens of industry awards and recognitions for his successful client representations and legal achievements as well as for his role as a leader in the legal profession, the business community and the public interest sphere. Brad is active in the community, serving on numerous public interest, educational, cultural and charitable boards and has frequently been recognized for his pro bono accomplishments and charitable service.

Chambers describes Brad as “the best strategic adviser in the business”; “the best litigator in the country”; “someone who every CEO in America should have on speed dial”; “someone you go to when you have a big problem”; “the titan of the defense bar”; “worth his weight in gold”; “a great oral advocate”; “a great leader who has boundless energy and is client-conscious and service-orientated”; “a phenomenal thinker”; “brilliant”; “extraordinary”; “an utterly fantastic lawyer”; “without peer”; “a renowned litigator”; “the absolute best”; “the consummate client service lawyer”; and “the most responsive lawyer in America.” Benchmark Litigation describes Brad as having “unbelievably great judgment”; “superior presence in the courtroom and the boardroom”; and as “the guy who makes every other litigator in this town consider just giving up and becoming a bus driver.” Best Lawyers describes Brad as “the most talented, responsive, client-sensitive, creative, effective lawyer of his generation in the country, no question.”

Brad has received dozens of industry awards and recognitions. Brad has been selected as the “Attorney of the Year” by the New York Law Journal and by Lawdragon, the “Litigator of the Year” by The American Lawyer and by Benchmark Litigation/Euromoney, and one of the most innovative lawyers in the United States by the Financial Times. Brad received the “Special Achievement Award” from the Financial Times in recognition of his legal achievements and leadership of Paul, Weiss. Brad has repeatedly been named by the National Association of Corporate Directors as one of the most influential people in the boardroom. The New York Law Journal awarded Brad its first-ever Impact Award, in recognition of Brad’s “significant and lasting impact on the legal community in New York.” Brad received the William Nelson Cromwell Award from the New York County Lawyers Association in recognition of his “unselfish service to the profession and the community.”

Brad speaks and writes frequently on business litigation, securities litigation, corporate governance, crisis management and ESG. Brad has spoken at more than 700 conferences and has lectured at Harvard Law School, Yale Law School, Columbia Law School, NYU Law School and The Federal Judicial Center. Brad has written more than 700 articles on business litigation and corporate governance issues. For the past 38 years, Brad has written a monthly column for the New York Law Journal, “Second Circuit Review,” which analyzes developments in the Court of Appeals for the Second Circuit. Brad is a frequent contributor to the Harvard Law School Forum on Corporate Governance and Financial Regulation.

Brad frequently speaks and writes about pressing issues of social justice. In 2022, Brad wrote an op-ed urging the FTC to address the gun industry’s  disinformation campaign, “The Gun Industry’s Deadly Lie” (June 2022, Fortune). In 2021, Brad authored an op-ed urging the legal industry to challenge Georgia’s voter suppression legislation, “It's Time for Legal Industry to Fight Voter Suppression Efforts” (April 2021, The American Lawyer). In 2020, Brad authored three op-eds concerning responses to the coronavirus pandemic: “We Need Obama, Bush and Clinton to Beat the Coronavirus” (March 2020, The American Lawyer); “The Legal Community Must Protect Workers and Small Businesses From Coronavirus Fallout” (March 2020, The American Lawyer); and “Protecting the Rule of Law in Times of Coronavirus” (April 2020, Bloomberg International). In 2018, Brad authored two op-eds in The New York Times, “Stop Shielding Gun Makers” (March 2018), advocating changes to gun manufacturer liability laws, and “An Army of Lawyers for Migrants” (June 2018), urging the private bar to address the unlawful treatment of immigrants and to seek the reunification of separated families. Also in 2018, Brad authored an op-ed in the New York Law Journal, “Democracy Itself Is on the Ballot,” addressing voter suppression and disenfranchisement.

Brad also is a founding member of the PwC Leaders Council examining financial services industry regulatory reform, and is a member of The New York City Bar Association Task Force on New Lawyers in a Changing Profession. For the past six years, Brad has chaired the Harvard Law School Annual Fund. In the wake of the pandemic, Brad was appointed by the Chief Judge of the New York Court of Appeals to the Commission to Reimagine the Future of New York’s Courts and chairs its Online Courts Committee. Brad currently serves as a director of the Vice President (Kamala Harris) Residence Foundation and as Co-Chair of the New York Attorney General’s Reproductive Choice Task Force.

In our video, Pro Bono at Paul, Weiss, Paul, Weiss attorneys discuss the firm’s unwavering commitment to supporting the public interest and providing pro bono legal assistance to the most vulnerable members of our society, as well as…

Firm Chairman Brad Karp was recognized as a Law360 2022 “MVP” in the Sports & Betting category.

Firm Chairman Brad Karp received the 2022 Burton Law Firm Leadership Award at a gala at the Library of Congress.