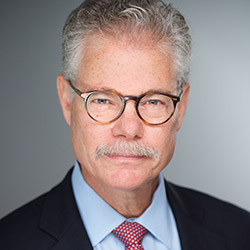 Daniel J. Kramer is a leading trial lawyer and litigator. Called “one of the stars of his generation” by Chambers, and a “quiet giant” by Lawdragon, Dan routinely handles complex litigations and regulatory matters for some of the world’s largest companies, represents boards of directors on corporate governance issues and leads special committees in internal investigations.

Dan is a senior partner in Paul, Weiss’ Securities Litigation and Enforcement Group. The Group has been named Securities Litigation Department of the Year by The American Lawyer, The New York Law Journal, Benchmark Litigation, Law360 and U.S. News and World Report. The American Lawyer called the practice “big, powerful and swaggering,” noting that “no other firm matched the number and magnitude of headline making securities litigation.” Similarly, Chambers ranks the Securities Litigation Department in Band 1, stating that the Group has “a truly enviable securities litigation practice,” a “dazzlingly deep bench” and “some of the most cutting-edge securities cases.” And Legal 500 gives the Group its highest rating, noting that “its excellent, wise counselors combine deep legal knowledge with a practical and business-like view.”

Dan is one of only four people selected as a “Star” securities lawyer by Chambers and he is recognized as a “Hall of Fame” securities lawyer by The Legal 500. He has been named one of America’s leading lawyers handling “Bet the Company” litigation by Best Lawyers in America, one of New York’s “Top 10 Lawyers” by Super Lawyers, one of the “500 Leading Lawyers in America” by Lawdragon and “one of the most influential people in corporate governance and the boardroom” by Directorship Magazine. In 2017, The National Law Journal named Dan a “Legal Trailblazer.” Best Lawyers in America named Dan “2017 Lawyer of the Year” for Securities Litigation and “2016 Lawyer of the Year” for Securities Enforcement Litigation. Dan also lectures and writes extensively on securities litigation, corporate governance and regulatory issues. He is the co-editor of Corporate Internal Investigations: An International Guide (Oxford University Press), and co-author of Federal Securities Litigation: A Deskbook for the Practitioner (Data Press) and of Regulation of Market Manipulation (Matthew Bender).

Dan's matters include representation of:

Dan also has an active pro bono practice.  He has teamed up with the Anti-Defamation League and States United Democracy Center in representing Washington, D.C. as it seeks recovery against the Proud Boys and Oath Keepers for harm to police officers during the January 6 attack on the U.S. Capitol; the Lawyers Committee for Civil Rights under Law, in representing the historic Metropolitan AME Church in a case against the Proud Boys for trespass and damage relating to the Church’s support of the Black Lives Matter movement; the Southern Poverty Law Center, on behalf of Tanya Gersh, who was severely harassed by Andrew Anglin, the neo-Nazi publisher of the Daily Stormer; and the Legal Aid Society, in a case that brought relief to all of the blind prisoners in New York State’s prisons.

As reported on ABC News and other media, Paul, Weiss obtained an arrest warrant from a federal district judge in Missoula, Montana against Andrew Anglin, founder and operator of the neo-Nazi website The Daily Stormer.

Litigation associate Katarina Broeksmit was recognized by The American Lawyer’s “Litigation Daily” column for her win in a criminal pro bono case.

Litigation partner Dan Kramer was recognized as a “Litigation Trailblazer” by The National Law Journal.

Litigation partner Daniel Kramer was honored by the Anti-Defamation League with its Human Relations Award.