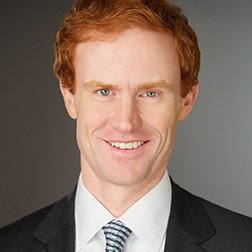 A partner in the Litigation Department and co-deputy chair of the Securities Litigation and Enforcement Group, Geoffrey Chepiga represents clients in a variety of litigation and regulatory matters, including securities fraud cases, mergers and acquisitions litigation and DOJ and SEC investigations.

Geoff was named to the French-American Foundation’s 2019 U.S. class of Young Leaders. Created in 1981, the Young Leaders program is a prestigious two-year transatlantic leadership program that brings together a group of 40 French and American rising stars under 40, from an array of sectors to forge bonds and help address global challenges.

Geoff also maintains a significant pro bono practice, a highlight of which is his representation, as co-counsel with the America Civil Liberties Union (ACLU), of thousands of children and parents who were forcibly torn from each other under the Trump administration’s illegal practice of separating families at the southern border. The matter, filed in U.S. District Court in Arizona, followed a nationwide injunction entered in June 2018 blocking family separations, also as a result of a lawsuit filed by the ACLU. In addition, Geoff also has been representing a class of individuals with mental disabilities residing in so-called adult homes in New York City. The class sued the state of New York, claiming that these homes violated the “integration mandate” of the Americans with Disabilities Act (ADA). After ten years of litigation, the parties reached a landmark settlement to end the state’s decades-long discrimination.

Geoff serves on the board of Trustees of the Quogue Library. He also is the co-author of “Ownership or Use? Civilian Property Interests in International Humanitarian Law,” which appeared in the 49th volume of Harvard International Law Journal in 2008.

Geoff Chepiga to Participate in Roundtable on SPAC Litigation Trends

Geoff Chepiga to Participate in Roundtable on SPAC Litigation Trends

Litigation associate Zalman Rothschild was recognized by The American Lawyer for his win in a Fourth Amendment appeal.

Litigation partner Geoffrey Chepiga has been named to the French-American Foundation’s 2019 U.S. class of Young Leaders.