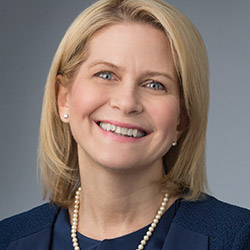 Jean McLoughlin is a partner and Co-Chair of the firm’s Executive Compensation Group. She advises a wide range of corporate, financial, and individual clients and compensation committees on all aspects of executive compensation, employee benefits and governance matters.

Jean is recognized as one of the leading employee benefits and executive compensation lawyers by Chambers USA, Lawdragon, The Legal 500, The Best Lawyers in America and Super Lawyers. Recently in 2022, Jean was recognized as an MVP in the Benefits category by Law360, honoring the attorneys who have made the most significant contributions to their practice. Furthermore, she was named to Crain’s New York Business’s 2021 “Notable Women in Law” list, celebrating talented female attorneys in the New York City metropolitan area. She received her J.D. cum laude from Harvard Law School, where she served on the Harvard Civil Rights-Civil Liberties Law Journal and was a member of the Board of Student Advisors. Jean has also been a member of the YWCA Academy of Women Leaders, an organization which recognizes women for leadership, achievements in their fields and contributions to the success of other women.

Jean counsels clients on issues related to the negotiation of employment incentives and compensation, including management equity arrangements and the associated tax and securities implications. She also advises on matters related to compensation disclosure and oversight of board executive compensation, as well as compensation and benefit issues in transactions and litigation.

Jean’s merger and acquisition representations include:

Jean’s other representations include:

Jean frequently speaks on topics regarding employee benefits and executive compensation. For years, Jean has been a member of the steering committee for the annual Forum on Executive Compensation, where she has co-chaired and led numerous panels. Most recently, she led separate interviews with representatives from the SEC and Institutional Shareholder Services (ISS) on various executive compensation and ISS-related topics. In 2019, she led a panel titled, “Recent Trends in Employment Arrangements: #MeToo, Restrictive Covenant Developments, MegaGrants and Other Topics du Jour.” In February 2021, Jean participated on a panel, “Executive Compensation Considerations for the Pre-IPO Company,” as part of the PLI’s Cool Compensation Considerations for the Private Company 2021: Pay, Performance and Perspectives program. Jean also participated in a September 2019 PLI panel on “Hot Issues in Executive Compensation 2019.” Other recent speaking engagements include a webinar on the topic of “Restrictive Covenants: Recent Developments, Best Practices and Strategies for Preserving Human Capital” (2018); CHRO Board Academy (2016 and 2017); PLI’s “Tax Strategies – Tax Compensation in M&A Deals” (2003–2014); and the NYSE Governance Program “This Week in the Boardroom” (2013), among others.

Executive compensation partner Jean McLoughlin was recognized as a Law360 2022 “MVP” in the Benefits category.