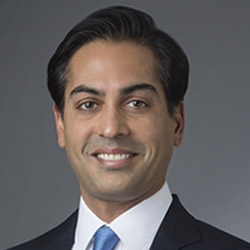 A partner in the Corporate Department, Krishna Veeraraghavan is a member of the firm’s Mergers & Acquisitions Group. Krishna focuses his practice on a range of corporate matters and has extensive experience advising public and private companies on domestic and cross-border mergers and acquisitions, leveraged buyouts and other transactions. He also regularly advises boards of directors and special committees on activist defense, proxy contests and the full range of corporate governance matters.

Krishna is involved in numerous professional, academic and community organizations. He is a member of the Council on Foreign Relations, the Dean’s Advisory Council of Princeton University, the Board of Trustees at Ethical Culture Fieldston School, Board of Directors of South Asian Youth Action, and the Steering Committee of the Board of Visitors at Columbia Law School, where he is also an adjunct professor. In 2014, the New York State Bar Association named him an Empire State Counsel Honoree for Pro bono Service.

Krishna is a frequent speaker and writer on developments in M&A and shareholder activism, as well as on law firm diversity strategies. He has been quoted in numerous articles in business and legal publications.

After a rocky start to 2020 that eventually gave way to a record-breaking 2021, M&A activity slowed to more historical norms in 2022.

Kyle Seifried to Speak on M&A Panel at NACD Summit

Kyle Seifried to Speak on M&A Panel at NACD Summit

Corporate partner Kyle Seifried will discuss a variety of M&A topics in a panel, “Ask the Experts: M&A Oversight,” at the National Association of Corporate Directors 2022 Summit.

Corporate partner Krishna Veeraraghavan was recognized as a Law360 2022 “MVP” in the Mergers & Acquisitions category.

The Deal named Paul, Weiss a finalist 15 times across various categories in The Deal Awards 2022.

Corporate partner Krishna Veeraraghavan was named a 2022 “Dealmaker of the Year” by The American Lawyer. The award honors lawyers who turned clients’ dreams into reality through innovative work helping clients complete…