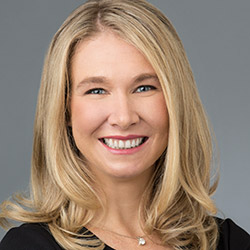 Laura C. Turano is a partner in the Corporate Department and a member of the firm’s Mergers & Acquisitions Group. Laura’s practice focuses on advising clients in connection with public and private company mergers and acquisitions, joint ventures, carve-outs and other significant transactions. She also advises clients on activist defense and corporate governance matters. Laura is Chair of the Women in Law Empowerment Forum (WILEF) East Young Lawyers Committee, a member of the Advisory Counsel of the NYU Law Institute for Corporate Governance & Finance and is an adjunct professor at NYU School of Law teaching mergers & acquisitions.

In 2022, Laura was recognized by Bloomberg Law in its “They’ve Got Next: 40 Under 40”, a finalist in American Lawyer’s Industry Awards for “Young Lawyer of the Year”, one of the “Top Women in Dealmaking” by The Deal, a “Rising Star” in M&A by Law360 and as one of the “500 Leading Dealmakers in America” by Lawdragon. In 2021, The American Lawyer named her “Dealmaker of The Year” for her role advising Teladoc Health in its acquisition of Livongo Health. Laura is also recognized in The Legal 500 for her work in Corporate/M&A.

Corporate partner Laura Turano will participate in a panel, “Advising the Board in M&A Transactions,” as part of the Practising Law Institute’s Mergers & Acquisitions 2023: Advanced Trends and Developments program.

Corporate partner Laura Turano will participate in a panel, “M&A Market: Current State and Future Direction,” as part of a Columbia Law School conference on M&A and corporate governance sponsored by the Ira M. Millstein Center …

Corporate partner Laura Turano is a finalist for “Young Lawyer of the Year” (Corporate category) in The American Lawyer’s 2022 Industry Awards.

Laura Turano Named to Bloomberg Law’s “They’ve Got Next: The 40 Under 40”

Laura Turano Named to Bloomberg Law’s “They’ve Got Next: The 40 Under 40”

Corporate partner Laura Turano was recognized by Bloomberg Law in its 2022 “They’ve Got Next: 40 Under 40” series as one of the most stellar young lawyers in the U.S.

Corporate partner Laura Turano was recognized as a Law360 2022 “Rising Star” in the Mergers & Acquisitions category.

Laura Turano Named Among “Top Women in Dealmaking” by The Deal

Laura Turano Named Among “Top Women in Dealmaking” by The Deal

Corporate partner Laura Turano was featured in a Q&A as one of the The Deal’s “Top Women in Dealmaking.”

Corporate partners Jeff Marell and Laura Turano were named “2021 Dealmakers of the Year” by The American Lawyer.