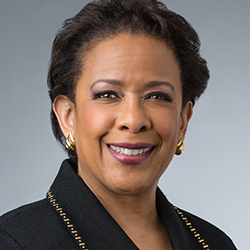 Former Attorney General of the United States, Loretta Lynch advises clients on complex government and internal investigations and high-stakes litigation matters, including those that implicate significant regulatory enforcement issues, that involve substantial reputational concerns, and that are international in scope. Loretta chairs the Civil Rights and Racial Equity Audits practice. Clients note that Loretta "is flawless in presentations and brings gravitas and experience to any situation" adding "people go to her for her extraordinarily broad experience and truly unique service - she is phenomenal."

Since her return to private practice in 2019, Loretta has helped lead several of the most sensitive investigations and reputation-threatening litigation and regulatory enforcement matters in recent years. BlackRock retained Loretta to help lead an internal investigation into former staffers’ allegations of sexual harassment and discrimination. She has also recently co-led representations of Syracuse University in an independent review of its Department of Public Safety’s handling of bias-related incidents raised by students during the 2019/2020 academic year; North Carolina State University in an NCAA investigation concerning money and other benefits allegedly offered to a former student-athlete in violation of NCAA regulations; and a Fortune 50 energy company in an internal investigation regarding discrimination and retaliation claims. Loretta is currently representing the McDonald’s Corporation in three high-profile racial discrimination lawsuits. She also counsels a number of prominent companies on ESG-related matters.

Loretta is also frequently retained for high-profile public advisory roles. She was appointed as a Special Advisor to the N.Y. Attorney General’s Office as part of its investigation into issues arising out of the conduct of New York City police officers during protests related to the death of George Floyd; and by the U.S. District Court for the Eastern District of New York to mediate a dispute between the Federal Defenders of New York and the Federal Bureau of Prisons concerning issues of attorney access to their incarcerated clients during the COVID-19-related suspension of in-person visits at the Metropolitan Detention Center in Brooklyn.

Loretta served as U.S. Attorney General from 2015 to 2017, becoming the first African-American woman to hold this office. In that role, she oversaw more than 100,000 employees across numerous agencies and offices, including the 93 U.S. Attorneys; major investigative agencies, including the FBI, the Drug Enforcement Administration and the Bureau of Alcohol, Tobacco, Firearms and Explosives; the U.S. Marshals Service; the Bureau of Prisons; the National Security Division; and the Office of the Solicitor General, among others. She also supervised the DOJ’s major litigating divisions, including Antitrust, Civil, Civil Rights, Criminal, Environment and Natural Resources, and Tax.

Loretta served under Presidents Obama and Clinton in a number of senior roles for over 15 years, including three Senate-confirmed roles.

Loretta received her J.D. and her B.A. in American Literature from Harvard University.

Litigation partner Loretta Lynch was featured in Fortune’s raceAhead newsletter in a piece discussing the rise and impact of civil rights and racial equity audits.

Paul, Weiss secured the denial of a preliminary injunction motion and the dismissal of a lawsuit brought against Pfizer Inc. by healthcare professionals association Do No Harm over Pfizer’s Breakthrough Fellowship Program, which is…

In a wide-ranging interview with Law360 Pulse, litigation partner Loretta Lynch discussed racial equity and civil rights audits as crucial tools for companies to measure their progress in meeting their diversity, equity and inclusion…

Litigation partner Loretta Lynch was the featured guest on the December 5 episode of the KPMG Board Insights podcast.

The DOJ recently announced obstruction of justice, money laundering and other charges against 13 individuals in three PRC espionage cases.

Paul, Weiss Named Most Innovative in ESG Practices by the Financial Times

Paul, Weiss Named Most Innovative in ESG Practices by the Financial Times

Paul, Weiss was recognized in the “Innovation in ESG Practices” category for the Financial Times’ Innovative Lawyers North America 2022 Awards.