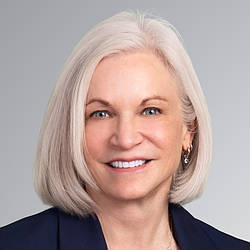 A partner in the Litigation Department and co-chair of the White Collar & Regulatory Defense Group, Melinda Haag is widely recognized as among the nation’s leading trial lawyers. Over more than three decades, Melinda has led or co-led more than 20 jury and bench trials, including complex white collar and civil rights cases, and has handled numerous white collar criminal matters, corporate investigations and complex commercial litigations. Melinda has long represented companies and their boards in law enforcement and multi-regulator investigations and in internal investigations, as well as senior executives in connection with government and internal investigations. Clients have described Melinda as “one of the best white collar lawyers in practice right now” and the lawyer that they “like to bring the thorniest cases.”
Melinda has had a distinguished career in public service. During her five-year tenure as U.S. Attorney for the Northern District of California, she spearheaded numerous high-profile investigations and prosecutions. Earlier, Melinda served for nine years as a federal prosecutor, ultimately being tapped by then-U.S. Attorney Robert Mueller as Chief of the White Collar section of the San Francisco office.
A Fellow with the prestigious American College of Trial Lawyers, Melinda has been recognized three times by the Daily Journal as one of the Top 100 Lawyers in California.

Among her most notable trial accomplishments, she won the acquittal, on all counts, of a former FitBit executive in a high-profile criminal theft of trade secrets trial brought by federal prosecutors in San Francisco; secured the complete acquittal of the CFO of a publicly traded pharmaceutical company in a federal criminal securities trial; and successfully defended the former general counsel of a publicly traded software company charged with federal criminal securities law violations.

In the white collar area, Melinda has represented, among others, the former marketing director of a Fortune 100 biotechnology company in a grand jury investigation concerning off-label promotion in which no criminal charges were filed; an Internet search engine in grand jury investigations related to online gambling and insider trading in which no criminal charges were filed; the former general counsel of a national bank in connection with parallel SEC, DOJ, OCC and Congressional investigations; a former Big Four accounting firm partner in connection with parallel SEC and DOJ investigations; and a public university system in an independent investigation concerning allegations that a university chancellor had engaged in misconduct.

Melinda has been recognized by Chambers USA for eight years in the White Collar Crime & Investigations – California category, with interviewees noting that “she is one of the best white collar lawyers in practice right now.” In addition to its Top 100 Lawyers in California list, the Daily Journal has named Melinda as one of the Top Women Litigators in California, Top White Collar Lawyers in California, and Top Trade Secrets Lawyers in California. In 2021, The American Lawyer recognized Melinda among the inaugural “West Trailblazers” for her achievements as a preeminent white collar defense attorney. She was named to San Francisco Business Times’s list of the Most Influential Bay Area Women three times; to Benchmark Litigation’s Top 250 Women in Litigation; and to Lawdragon’s list of 500 Leading Lawyers in America. Melinda has also been recognized by The National Law Journal and The Legal 500 US for her achievements in high-stakes white collar matters.

Among her several public service recognitions, Melinda was presented with the Lawyers’ Committee for Civil Rights Public Service Award in connection with her work as the Civil Rights Coordinator for the U.S. Attorney’s Office, and most notably for leading the prosecution of former Pelican Bay State Prison correctional officers who were charged with violating the civil rights of numerous prison inmates in their care. Melinda was previously appointed by retired U.S. Sen. Barbara Boxer to the Senator’s Judicial Advisory Committee to assist the senator in selecting federal judges, U.S. Attorneys and U.S. Marshals for the Northern District of California.

After beginning her career as a litigation associate, Melinda served as an Assistant U.S. Attorney for the Central District of California in Los Angeles. She thereafter worked as a partner in a San Francisco boutique law firm before being tapped by then U.S. Attorney Robert Mueller to serve as a supervisor in the San Francisco U.S. Attorney’s Office. Melinda stepped down as the Chief of the White Collar Section in 2003 and returned to private practice.

Between 2010-2015, Melinda served as U.S. Attorney for the Northern District of California after being nominated by President Barack Obama and unanimously confirmed by the U.S. Senate. In that role, she led a team of more than 130 criminal and civil Assistant U.S. Attorneys, and led investigations and prosecutions involving export enforcement, computer intrusions and intellectual property theft, international corruption, digital currency issues, securities fraud and economic crimes, health care fraud, national security, public integrity, civil rights violations, and organized crime, among others. Melinda served as co-chair of the White Collar Crime Subcommittee of the Attorney General’s Advisory Committee and was a member of the Cybersecurity and Health Care Fraud Subcommittees, where she collaborated with U.S. Attorneys nationwide on the development and implementation of national policies and practices regarding the government’s approach to economic crimes and cybersecurity.

Melinda currently serves on the Board of Governors of the Boys & Girls Club of San Francisco, and on the board of the Giffords Law Center to Prevent Gun Violence. She is active as a Fellow of the American College of Trial Lawyers. Melinda has provided assistance to the courts and legal community in various ways throughout her career, including service as a Ninth Circuit Lawyer Representative, and as a member of the Professional Responsibility Committee for the Northern District of California, the Bar Association of San Francisco Judicial Appointments Committee, the ACLU Lawyer’s Council and the Lawyers’ Committee for Civil Rights.

Litigation partner Melinda Haag participated in a Q&A with Benchmark Litigation to celebrate her inclusion on Benchmark’s “Top 250 Women in Litigation” 2022 list.

Paul, Weiss, alongside co-counsel at Orrick, Herrington & Sutcliffe LLP, won a complete victory for Ocwen Financial, one of the nation’s largest mortgage servicing companies, securing the decertification of a nationwide class in a …

Litigation partners Melinda Haag and Andre Bouchard will speak on panels at the 2021 Berkeley Forum for Corporate Governance.

Litigation partners Randy Luskey and Melinda Haag were recognized in The American Lawyer’s “Litigation Daily” column, alongside co-counsel from Orrick, Herrington & Sutcliffe, for their win in a significant RICO consumer class…

Litigation partner Melinda Haag was recognized as a “Top 100” lawyer by the Daily Journal.

Litigation partners Walter Brown and Melinda Haag were recognized among the inaugural “West Trailblazers” by The American Lawyer.