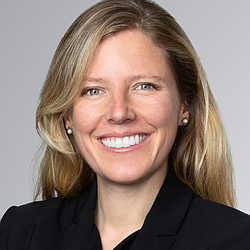 A partner in the Litigation Department, Meredith Dearborn has significant experience trying high-stakes commercial disputes for leading technology companies.
Meredith has taken ten cases to trial, winning favorable outcomes on behalf of several of the largest tech firms in Northern California. Her matters involve a variety of substantive areas, including intellectual property, contract, antitrust, and California state statutory and common law issues.
Meredith has long been recognized for her talent and dynamism. In 2022, Meredith was recognized by Law360 as an MVP in the “Technology” category, named an Insider “Rising Star of the Courtroom,” recognized by the Daily Journal as a “Top Antitrust Lawyer,” and was included in Benchmark Litigation’s “40 & Under Hot List.” In 2021, Bloomberg Law named Meredith an Antitrust Rising Star in its “They’ve Got Next” series, Law360 named her a Rising Star in the “Technology” category, and the Daily Journal recognized her as a “Top 40 Under 40” lawyer. The American Lawyer previously named Meredith a “Litigator of the Week” for a high-stakes trial win on behalf of a large technology company in federal court in Boston. In 2018, Meredith was recognized as one of Silicon Valley’s “40 Under 40” by Silicon Valley Business Journal and as a Next Generation Honoree in The Recorder’s “Women Leaders in Tech Law.” Meredith is also recognized by Lawdragon as one of the “500 Leading Litigators in America” and by Benchmark Litigation as a “Future Star.” She was previously named a “Rising Star” by Super Lawyers for eight consecutive years.

Meredith has played a key role in several of the most high-profile matters in California in recent years, bringing efficiency, attention to detail and a trial-ready instinct to her cases. Meredith approaches each matter as if it is going to trial by crafting winning strategies from the outset; clients trust her to prepare their most important witnesses to testify.

Meredith’s recent engagements and achievements include:

Meredith is a leader in the Bay Area legal community. In 2022, she was selected for a three-year term as a Lawyer Representative to the Ninth Circuit Judicial Conference. She also is member of the Board of Directors of The Justice & Diversity Center of the Bar Association of San Francisco and sits on the Advisory Board of the East Bay Community Law Center, one of the largest non-profit organizations offering free legal services in the San Francisco Bay Area. Meredith previously served as a Lecturer in Law at Stanford Law School, where she taught Federal Litigation in a Global Context for three years. She regularly presents on intellectual property and trial practice issues for legal industry, educational and trade groups.

While at the University of California, Berkeley School of Law, Meredith served as an extern at the U.S. Department of Justice Antitrust Division in San Francisco. She was Senior Supervising Editor of the California Law Review and received the Thelen, Marrin Prize for Law Journal Writing in 2009. Meredith previously clerked for the Hon. John C. Coughenour of the U.S. District Court for the Western District of Washington.

Paul, Weiss achieved a significant victory for Amazon Executive Chairman Jeff Bezos and investigator Gavin de Becker when the California Supreme Court denied a petition to review the California Court of Appeals’ dismissal of a…

On March 7, the Ninth Circuit affirmed a lower court’s dismissal of a complaint alleging that manufacturers of dynamic random access memory (DRAM) conspired to reduce their output in violation of Section 1 of the Sherman Act. The…

Litigation partner Meredith Dearborn was recognized as a 2022 “Top Antitrust Lawyer” by the Daily Journal.

Litigation partner Meredith Dearborn was recognized as a Law360 2022 “MVP” in the Technology category.

Litigation partner Meredith Dearborn was named an Insider “Rising Star of the Courtroom” for 2022. In a short interview with Insider, Meredith discussed her path to becoming a lawyer and her enthusiasm for trial work.

Paul, Weiss’ Win on Behalf of Apple in Epic Trial Recognized by Daily Journal as a Top Defense Verdict of the Year

Paul, Weiss’ Win on Behalf of Apple in Epic Trial Recognized by Daily Journal as a Top Defense Verdict of the Year

Paul, Weiss, along with co-counsel Gibson Dunn, was recognized by the Daily Journal for winning one of the three top antitrust defense verdicts of 2021 in the Epic Games v. Apple trial.

Litigation partner Meredith Dearborn was recognized in Bloomberg Law’s latest “They’ve Got Next” series, which highlights the work of five rising stars in the world of antitrust.

Litigation partner Meredith Dearborn was recognized as a “Top 40 Under 40” lawyer by the Daily Journal.