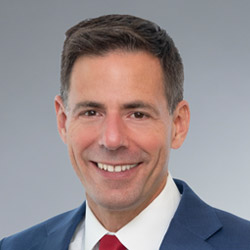 John P. Carlin is co-head of Paul Weiss’s Cybersecurity & Data Protection practice and a deeply accomplished litigator who advises industry-leading organizations on matters involving privacy and cybersecurity, crisis management, Committee on Foreign Investment in the United States (CFIUS), sanctions and export control, white collar defense and internal investigations. He has served as a top-level official in both Republican and Democratic administrations, including as the Acting Deputy Attorney General of the United States, as the top national security official for the U.S. Department of Justice, as the Chief of Staff of the FBI and as an experienced Assistant United States Attorney. Mr. Carlin has been featured or cited as a leading authority on cyber and economic espionage matters by numerous major media outlets, including The New York Times, The Washington Post, The Wall Street Journal, The Los Angeles Times, USA Today, CBS’s 60 Minutes, NBC’s Meet the Press, PBS’s Newshour, ABC’s Nightline and Good Morning America, NPR, CNN and Vanity Fair, among others.

Appointed Acting Deputy Attorney General and then Principal Associate Deputy Attorney General to Deputy Attorney General Lisa Monaco (January 2021-July 2022), John occupied “one of the most powerful and under-the-radar posts in the Justice Department,” according to The New York Times, advising on major prosecutions, such as the January 6 investigation, and other top DOJ priorities, including FBI oversight, cryptocurrency theft and investigations of actors known to have helped Russia evade sanctions. He also played a pivotal role in instituting the DOJ’s current approach to cybersecurity, national security and corporate criminal enforcement.

John has deep experience leading high-profile national security and criminal enforcement matters. He previously served as Assistant Attorney General for the DOJ’s National Security Division, making him the Department’s highest-ranking national security lawyer. In this role, he supervised 400 employees responsible for protecting the nation against terrorism, espionage, cyber and other national security threats. During his tenure, he oversaw the prosecution of the Boston Marathon bomber, the indictment of five Chinese military members on economic espionage charges, and the DOJ’s foreign investment review program, which includes the review of foreign acquisitions through CFIUS, Federal Communications Commission (FCC) reviews and other emerging technology matters and related litigation.

During his most recent tour at the DOJ, Mr. Carlin advised U.S. Attorney General Merrick Garland and Deputy Attorney General Lisa Monaco on the department’s most pressing—and visible—criminal prosecutions. Those included cases stemming from the January 6 assault on the U.S. Capitol, and the pursuit of oligarchs and others alleged to have enabled Russia to avoid sanctions.

Prior to that, John served as chief of staff and senior counsel to former FBI Director Robert Mueller, helping lead the FBI’s evolution to meet growing and changing national security threats, including cyber threats. He also served as national coordinator of DOJ’s Computer Hacking and Intellectual Property Program. John began his legal career as an Assistant United States Attorney for the District of Columbia, where he tried more than 40 cases to verdict.

John, who joined the DOJ through the Attorney General’s Honors Program, is a five-time recipient of the Department of Justice’s Award for Special Achievement; was awarded the National Intelligence Superior Public Service medal by the Director of National Intelligence; and has drawn bipartisan praise. He is also the recipient of the Department of Justice’s highest award—the Edmund J. Randolph Award. The award, named for the first Attorney General of the United States appointed by President George Washington, recognizes outstanding contributions to the accomplishments of the Department’s mission. One of the country’s most sought-after commentators on cyberwarfare prior to his stint at the DOJ, John is co-author of Dawn of the Code War, a sobering analysis of American efforts to defend against cyberattacks by foreign powers. He was an inaugural Fellow of the Harvard Kennedy School’s Belfer Center for Science and International Affairs’ Homeland Security Project, focused on the unique challenges and choices around protecting the American homeland. John is the Founding Chair (now Chair Emeritus and Strategic Advisor) of the Aspen Institute’s Cybersecurity and Technology program, which provides a cross-disciplinary forum for industry, government and media to address emerging digital threats and craft policy solutions.

In the first order of its kind, the U.S. Department of the Treasury’s FinCEN identified global cryptocurrency exchange Bitzlato as a “primary money laundering concern” under the Combating Russian Money Laundering Act.

The Year Ahead: Key Cybersecurity and Privacy Issues for 2023

The Year Ahead: Key Cybersecurity and Privacy Issues for 2023

Against a backdrop of an evolving threat environment, expect new regulations on cybersecurity and privacy from federal, state and international authorities and increased enforcement.

The DOJ recently announced that its months-long effort to disrupt the operations of Hive, a group that has launched ransomware attacks against more than 1,500 entities around the world, resulted in the successful interdiction of…

The U.S. Secret Service recently confirmed that APT41, a hacking organization that it says is linked to the government of the People’s Republic of China, fraudulently obtained at least $20 million in federal COVID-19 relief funds. The …