The world's largest multinational corporations, top-tier international investment banks, private equity and entrepreneurs all rely on our Corporate Department to resolve their thorniest legal and business challenges. Our lawyers have earned high praise for their innovative approach to complex transactions and are recognized internationally as leaders in mergers and acquisitions, capital markets, finance and investment funds.

In December 2016, the China Insurance Company Regulatory Commission (“CIRC”) released draft Measures for the Administration of Equity Interests in Insurance Companies (the “Previous Draft”). We had briefed you about this development (see our previous updates on China insurance M&A reform and changes in investments in Chinese insurance companies).

On July 20, 2017, CIRC released a revised draft of the same Measures (the “New Draft”). The New Draft differs from the Previous Draft in significant respects, which we highlight below.  CIRC is holding another round of public consultations on the New Draft, in which comments may be submitted until August 21, 2017.

Shareholders of insurance companies are classified into the following four categories based on the size of their shareholding, instead of three categories under the Previous Draft: 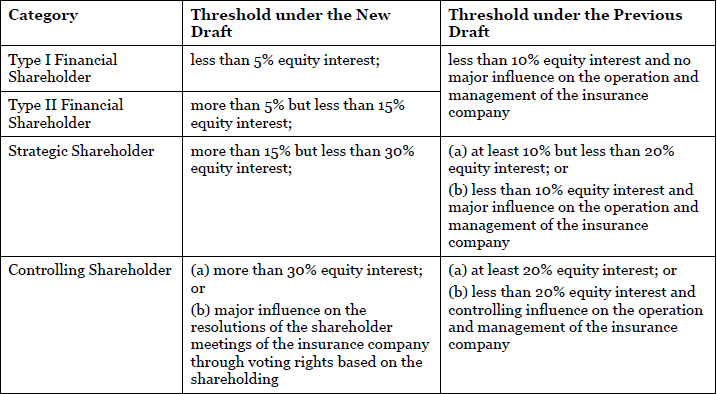 The maximum shareholding in an insurance company is limited to one third of the share capital, as in the Previous Draft. The New Draft also repeals the existing CIRC rules on mergers and acquisitions of insurance companies, which allow investors to acquire a higher shareholding.

The New Draft provides for longer lock-up periods as shown below:

The New Draft removes the clarification (which features in both the Previous Draft and the currently effective regulations) that shareholding in insurance companies in which foreign investors hold at least 25% of the equity interests is subject to separate rules. Imposing the provisions of the New Draft (in particular, the 33% maximum shareholding) on such companies would be a major change; it is not clear whether this is intended or implied in the New Draft.

The Previous Draft had removed the existing requirement that equity investments in insurance companies must be made with the investor’s own funds, thus liberalizing financing for acquisitions. The New Draft not only reinstates the requirement, but prohibits arrangements to circumvent it, specifically targeting nominee arrangements, special purpose vehicles and structured financing. As a new deterrent, shareholders who enter into nominee or beneficial transfer arrangements can be deprived of their voting rights.

Corporate partner Laura Turano will participate in a panel, “Advising the Board in M&A Transactions,” as part of the Practising Law Institute’s Mergers & Acquisitions 2023: Advanced Trends and Developments program.

The National Law Journal honored Paul, Weiss twice as a “Legal Technology Trailblazer,” both for the firm’s collaborative M&A transaction hub DealSite, and for the firm’s E-Discovery Analytics and Review Technologies Team (eDART).

Corporate partner Judie Ng Shortell was recognized in The Legal 500 Asia Pacific Hall of Fame for her achievements in private equity work and in the technology, media and telecommunications (TMT) industry in China.

Paul, Weiss was shortlisted in four categories in the International Financial Law Review’s 2023 Asia-Pacific Awards, which recognize legal innovation in cross-border transactions that closed during the past year.

Paul, Weiss was named a Law360 “M&A Group of the Year” for its many transactional achievements in 2022.

Paul, Weiss won seven Law360 “Practice Group of the Year” recognitions for its achievements in 2022, including in the Appellate, Banking, Fintech, Mergers & Acquisitions, Sports & Betting, Trials and White Collar categories.

ESG and corporate associate Reco Charity was recognized by Lawyers of Color, a nonprofit devoted to promoting diversity in the legal profession, on its Hot List 2022.

Corporate partner Tong Yu was spotlighted as one of the top dealmakers in Asia by Asian Legal Business in its “Dealmakers of Asia 2022” list.

Corporate partners Jeff Marell and Cullen Sinclair were spotlighted as nationally leading media and entertainment dealmakers by The Hollywood Reporter in its “Hollywood’s Top Dealmakers of 2022” list.

Paul, Weiss Shortlisted for PEI 2022 “Law Firm of the Year in North America” in Transactions Category

Paul, Weiss Shortlisted for PEI 2022 “Law Firm of the Year in North America” in Transactions Category

Paul, Weiss was named a “Law Firm of the Year in North America” finalist in the transactional category by Private Equity International, as part of the 2022 PEI Awards.